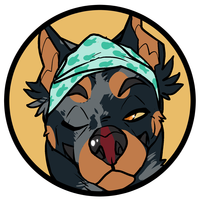 About: Doesn't have much to say, but has so much to give, including his loyalty, heart, and good food. Argueably the best chef in a fifty mile radius of town, but doesn't boast about it, his food speaks for itself. His aged bistro is attached to a small four room inn that he also runs.

Personality: Boscoe is a very soft spoken and kind warm soul. Probably has a two minute conversation with someone every other day, otherwise very quiet, especially if not addressed to first. Polite beyond reason, and loves to put smiles on faces with his gift of cooking. Large and imposing in stature but truly he's just a big ol teddy bear. Great A+ cuddler. Will use his strength if need be if he sees someone in danger.

NSFW Details: Pansexual. One big boy! Mostly a submissive/bottom, but will mostly do whatever his partner is down for. Very huffy, but doesn't say much at all. Loves to put his paws on hips, legs and butts! Loves to have his nips played with and balls cupped/fondled.

Likes: - Fresh ingredients - Warmth of an oven - Listening to the cacophony of conversations in restuarants etc - Checking out tidepools - A good hamburger