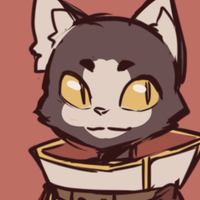 "I wish you good fortune as long as mine is better."

A Tabaxi cleric who became an adventurer to learn more about legends.

Clover grew up in a happy and comfortable home, if also a bit uneventful.  His parents often traveled so he, along with the other children in his tribe, were raised with the entire community acting as parents.  He loved hearing stories of adventurer's travels and became particularly intrigued with legends learned from humans.  As soon as he became old enough to be self-sufficient he left his home to become an adventurer himself.  Intent on joining a party to more safely explore the ruins that captured his interest, he realized the easiest way to make himself valuable would be to offer medical services.  He chose to train as a cleric worshiping Olladra, the god of good fortune and plenty, though he held very little real faith in any god seeing them more as a tool for convenience than an object of worship.  Eventually his efforts paid off and he found a party, but when a battle became risky he chose to escape on his own rather than stay and possibly die with his companions.  He repeated this pattern as a fair weather party member, his reputation for surviving adventures even when the rest of his party perished eventually earning him the nickname "Lucky."

Clover is charming and friendly and quick to endear himself to anyone he encounters.  He lives for the moment and loves a good party, especially if he can get some juicy gossip out of it.  Though he makes friends easily he keeps himself at a distance, rarely getting invested in others or letting them know anything about himself.  He likes to appear cheerful and easy-going at all times and it can be tricky to know what he's actually thinking.  When adventuring he's perhaps overly cautious and ultimately puts his own self-preservation above other's.  Although he harbors no ill will towards his companions he's quite selfish and unlikely to do anything for them unless he believes it may somehow benefit him.  On rare occasions his curiosity will overpower his caution, but he almost always plays it safe in an unknown environment.