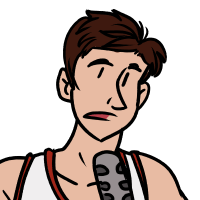 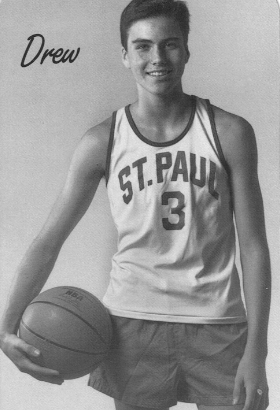 Drew and Eddie man the sports desk on the sports TV station ROOTNET SPORTS. Their drivetime sports call-in show is called Sports in the Morning with Drew and Eddie. It's the kind of noisy, fast-paced call-in show where the hosts scream everything, barely listen to the callers' questions, and would rather talk about every sport other than baseball, even though the brand-new Root Baseball League is the talk of the town, and baseball coverage (thanks to Dag Dag and ASTROBOT) is the pride of the station they work for.

Although Drew plays along with Eddie and also speaks in dumb non-baseball sports analogies when on the air, he's obviously much smarter and way less of a mess than Eddie, and he's usually somewhat concerned about what on earth Eddie is up to now. When Eddie has gone off the rails, Drew is the one who will keep the show running. He's also nicer than Eddie, who's thoughtlessly macho and insulting.

Both hosts are teenage boys, along with station director Clayton and most of the callers, because for the game I play these characters in I use, Action League Now! style, miscellaneous in-joke characters and physical objects as the NPCs-- the teens are cards from 1988 board/card game Heart Throb, where they're among the dating candidates. There are several guys holding sports equipment in the game, but no baseball players.