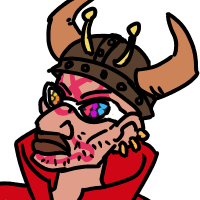 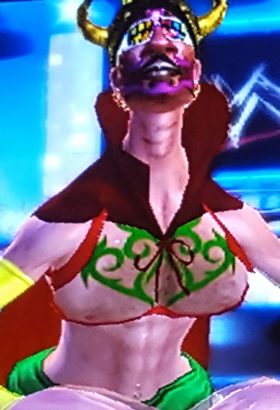 The wrestler who just wants the fans to love him.

Wrestling out of the same indie promotion as BEEF BEEF, Danger Doop is his rival, both inside the ropes and out.

Danger Doop might be the only person in the company who really cares, but he probably cares too much. Desperate for the disinterested "crowds" to like him, he isn't quite sure what his gimmick is because he keeps rooting through the box of props and adding more things to his gear in case they help. He always stays late to try to sign autographs and take pictures with fans, but mostly he just makes children cry.

Danger Doop's pretty good at holding it together in front of the fans-- he's a professional!-- but when they've all left, you'll often find him sobbing as he helps to tear down the ring.

Frankly, the other workers are pretty sick of it.

All he wants is for the people to like him. He's not a very good wrestler, but pro wrestling is his dream, and the youthful indiscretion that led to his facial tattoos has left him unemployable by normal professions.

BEEF BEEF, meanwhile, is supposed to be the heel in their feud, but the crowd loves him no matter how half-assed he wrestles and how much he blows off the fans seeking autographs, pictures, or even high-fives. Danger Doop can't stand it, and he's determined to make the fans see why he's the one who deserves their love.

Danger Doop is a wrestler WaffleFoxAlpha and I created in the PS3 game WWE Smackdown vs. RAW 09 after digging it up in the back of a second-hand game shop in 2016.