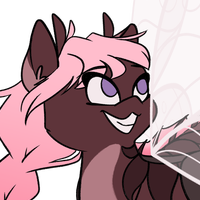 Bio: Being Viola’s older sister she was often tasked to take care of her (even though Viola was very independent and had no trouble being on her own). She felt no freedom having to drag her younger sister everywhere and when Viola was old enough to apprentice in crafting, she ran off to have as many adventures as she can. Will often leave on expeditions to find rare items and later turn them into jewelry or trinkets to sell. Very "In the moment", irresponsible, adventurous, and distant but still loves coming back home to spend time with her Lil sister.