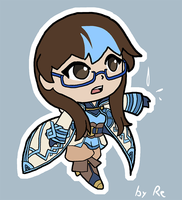 Appearance: Shade is very similar to Ariel with having Brown hair and eyes along with blue glasses, but she attempts to be different than her. Shade has a light blue streak in her hair and is 5'0. Shade wears a White and Light Blue summoner's jacket, since her original was destroyed when fighting Veronica on Hard mode, a light blue shirt, brown pants and brown boots.

Personality: Shade is like Ariel's various incarnations, except for one thing. Shade gets really whiny when she gets 3*'s. Often writes shipping fics out of her army's bonds

"Great, another bitchy tome pitybreaker." -About Lute on the Bride 2017 banner.

"How much of my non existent soul do I have to give for the character I want to come home?"

"I regret teaching Lyn about what the word thot means."

'Did someone mention homestuck?"

"I've only had Reinhardt/Lukas/Berkut/Anthony/Darios for 10 minutes and if anything were to happen to him I'd kill everyone in the order and then myself."

"I think this is the first time in my life I've ever been ok and wanting a Camilla alt." -About Summer Camilla

"I WANTED OBSIDIAN EDGELORD NOT FUCKING EMOTIONS SCREWING ME OVER LIKE CORRIN FUCKING EVERYONE IN THE ASS!" - Echoes Act 5.

"So wait, I'm not allowed to take a shit 10 minutes into the meeting?"

"WELLL EXCUUUUUSE ME PRINCESS!" -To Anna about all the money making schemes.

"To quote one of my online friends: Giraffe Necks." -About her art.

"Well I think it's lovely art." -About Sharena's art

"I'm not a hero. I'm just a little kid pretending to be a hero. Soon I'll be ripped out of my fantasy by reality and everything I know will be made up. You guys as dolls/action figures with me self indulging myself. Ike is the one who's classified as the hero, so go worship him and Lyn. They're the popular ones. It's fine, I'm used to being alone, just go and be happy ok?" -Self doubt

"I want Berkut to get an alt in the new feh channel. I'm probably going to get waifu bait I don't need."

"WHAT THE FUCK ELDIGAN!? NOW IS THE TIME WHEN YOU SHOW UP AND NOT ON THE FURY BANNER!? I HAD A 3.75% PITY RATE FOR NOIRE OR SUMMER INNES!"

"The term is friends Athena, but yes, we are strong women."

"I'm fucking done with this banner." -After another Julia destroyed her pity rate.

"I didn't get waifu bait but I got Lucius 2.0, Blazingknight's best girl, waifu bait and whatever the fuck Maribelle is. Also Walmart but I now need to restrain Berkut from murdering him."

"I regret teaching everyone about memes and yeet."

"This is so sad. Azura sing Lost In Thoughts all Alone."

"I really dunno guys, I guess 0 x 0 is still 0. They always say two wrongs don't make a left, and I truly believe I'm living proof of that because I'm dragging you guys down so much! I'm just on big, good for nothing weeb with a gun that can't even let me kill myself."

"PERI YOU CAN GO HOME! I DON'T NEED YOU I NEED SILAS."

"Why did someone put candy in Dorcas' mutton?"

"And more pointless armors that make no fucking sense."

"Reinhardt we have 11 small versions of you, isn't that enough?" "But Shade they're me!"

"Anthony should've been in the adrift banner because it's valla themed UNLIKE CAMILLA."

"Skipping the first 2 person focus because it fucking sucks."

"Why the fuck did they not give Helbindi and Ylgr New Years alts?"

"Oh this is merely a flesh wound." - World of Light and Book 3 summerized

"Why cant I hold all these Reinhardts."

"I've only known Reinhardt/Anthony for 5 minutes and if anything were to happen to them, I'll kill everyone in this room and then myself because I hate myself enough already."

"I know that this is all a self indulgent dream, but it seems like I just can't wake up and enter my sad reality."

"Finally the trio of the Reinhardt."

Bio: A girl from our world summoned to fight for Askr. She lives there full time in order to protect her heroes and to make sure a certain flame lord doesn't give Arvis a run for his money.  As of Book 3, there is a lot of crippling depression, mainly from her and Eir. Help her

Has a crush on Reinhardt, but knows that he's out of her league, due to age difference and the fact he is S ranked with Lukas but still writes shipping fics between them because she has no control.

Is ready to drop Bartre on someone if she needs to.

Has no self control around food.

If she were able to due to the ward and lack of training, Shade would beat the fuck out of Sutr bc you just don't turn people into smores in front of their siblings

Taco Bell is her spirit animal and doesn't get explosive diarrhea from it. Everyone thinks she is mutated because of this

Shade has no control over food because she herself is a terrible cook in the area of pots and pans, so that makes her admire anyone that CAN cook for her, and is also why she likes takeout and fast food; she doesn't need to cook! A common theme in her ship fics is the 2 characters in question having a homecooked meal on their dates with each other.- Contributor for the hc

Shade often gets teased by her units for her height, since they're all sO FRICKIN' TALL. Especially Frederick, but his way of joking about it is a little more subtle (since he's not usually the type to do that).- Contributor of Hc

Alfonse: The annoying fun police that ruin everything for her

Sharena: Sister she never had and her fun buddy

Anna: Greedy Bitch who criticizes art even though she doesn't draw.

Bruno/Zach: "My work here is done." "But you didn't do anything."

Feh: Sweetie. Also she can purr like a cat

Fjorm: Discount Elsa combined with Zuko but a friend nonetheless

Ylgr: Anthony is the only traitorous kid I need in my life thank you very much

Hrid: WHy is tumblr obsessed with you?

Sutur: "I am the Ice guardian, guardian of the ice." "THE FLAMES COWER BEFORE HER." "FUCK OFF YOU RUSTY TOASTER!"

Helnnriette: I can see the peppyness runs in the family.

Hel: Is that a woman? That looks like a shitty Undertale oc more than the leader of the fucking dead

Lif: Join us idiot, we have your descendants and cookies

Thrasir: Same as Lif, except they need to kiss like now.