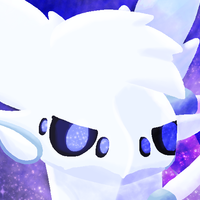 Dellingr is a mechanical griffon that's actually an alien from another world. They know absolutely nothing about humans, though they tried to have killed one due to a malfunction that oocured in their mind a long time ago. It is said that this being was created in a distant planet from another galaxy.

Their appearance is that of a griffon-like robot in blueish white metal, with one half resembling that of an eagle, while the other half is that of an unknown creature, presumed to be a lion. It has a long, lilac tail, which ends with a light blue trident-like tip. They have three purple eyes with dark sclera on each side of its face, two that are small, and one that is larger than the small ones which is placed in between them. They have a pale blue waist that links between their eagle and lionlike half.

Dellingr seems to be an alien with a mind of a feral being. They were never heard talking, and behaves like an ordinary griffon. Nothing else is known about their personality, however.