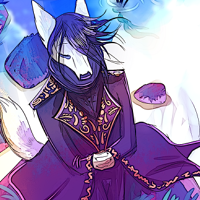 Kronov is a weak and elderly fox that fondly tends to a public garden. Widowed by a vengeful wife that wanted his wealth, Kronov never met the son he sired with her. Instead he was left on his own in a quaint home just down the street from his place of work. The fox walks with a slight limp in his right leg and has a warm, old smile. He is especially fond of a small bonsai tree that has been growing in the garden he maintains. Many of the younger landscapers push for him to retire but he refuses to leave. The garden itself is indoors, permitting the various plants to thrive even in the frostbitten winters. Much of his time is spent within the grounds of the garden itself.

[ barely acquaintance ] An unusual cryptid of the streets, Rodey occasionally pays visits to the garden Kronov tends to. Kronov is never able to get close enough to Rodey, as he usually flees before he can approach.

[ acquaintance ] A rare visitor, Lawrence and Kronov will cross paths and share stories during their unintentional crossings in the park.