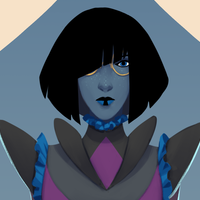 "The Baroness was in the habit of drawing a conspicuous air of mystery about her like a sequined cloak that brought attention to the fact that something was being obscured."

Baroness Blackrain is the queen of goths. She devotes no small amount of her wealth to pursuing the aesthetic. Pitch blackness is her trademark; she is fond of wearing the combination of black and blue, the colours of her house, going so far as to dye her skin bluish grey, and her hair black sometimes. She takes pains not to be seen among the public, dressing all the places she frequents in deepest black and having all her houses built without windows.

Indeed black seems to be the colour enshrouding her entire life, shielding all her activities from the gazes of those whom she distrusts—namely, everyone who isn't her wife and advisor Mellistella.

Blackrain is almost as mad as the matriarchs of the rest of the houses. Out of sight, out of mind is a principle around which she organises her life; her preferred method of dealing with those she dislikes is to exile them to the Third World—a veiled death sentence, seeing as almost none of the exiles survive longer than a week there.

In the past, Blackrain proved less adept than her fellow matriarchs at putting aside her personal life in the name of her house—a fact that has been exploited by others better at playing the political game. She has an ironic, sardonic sense of humour, and is the master of backhanded compliments and veiled insults.

Blackrain was born the second child and only heiress of the House of Spades, her older brother Murkvane ineligible for the matrilineal position of Baroness. She grew up in a household full of secrets, as many Queendom matriarchs do, learning that she could not trust even her parents despite wanting to.

Those parents eventually married Murkvane off to the then-Duchess of Diamonds, Adamanta, believing what they got in exchange to be a worthy bargain for their house. Instead it only resulted in the birth of the heiress Orobelle, who had clearly been conceived with belligerent aims.

Blackrain has come to distrust the House of Diamonds more than any other faction and to plant agents there in the hopes of sowing unrest against their rule.