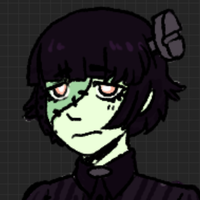 Don't put your life in someone's hands, they're bound to steal it away.

Kuro has an androgynous appearance with a thin petite body, short black hair, vintage orange eyes, long lashes, and a tall stature. A single bolt can be seen on Kuro's head straight above the ear. They also possess a sloppy stitched up face, containing two different green tones. They tend to wear long black victorian attire, with many straps surrounding the waist and wrist.

Kuro died at a young age, thus becoming an undead soon after. Becoming undead is natural and welcomed in Kuro's hometown, thus life continued on regularly. Once Kuro reanimated, they soon became aware of their new ability, Healing Wavelength. Having the ability to heal mental illnesses, disorders and other forms of mental trauma, to their healthy state and reverse the effects of mental tampering, such as mind control or memory loss

Kuro's quirk became known to the world soon after, many people have come all over to gain a chance to be treated. Kuro can only use their quirk in small amounts, if overused the mental troubles they're trying to heal will becoming Kuro's problem personally.

Though this didn't stop their abuser, soon after Kuro fell into the hands of someone terrible. Being prisoner, they were forced to ONLY treat the abuser, and in large fast amounts. Overtime this took a toll on Kuro, causing MANY mental and physical issues, one of them being Kuro's quirk. After all the abuse, they could no longer perform their ability no matter how hard they tried. Thus, Kuro was deemed useless, being thrown away like trash. Being deemed useless and ineffective didn't help Kuro's mental state at all, they could no longer function as a person and was put in a Mental Health Rehabilitation Center. Mortimer is Kuro's biggest supporter, often making Kuro feel as they really can change and become a better person. Kuro heavily relates to Cecil, often going to him when they feel awful about themselves. They find it so amazing that Cecil is just like them, but trying so hard to grow as a person. Dent brought Kuro into his rescue team after receiving news from Mortimer and Cecil. Dent gave Kuro a proper home, and somewhere Kuro can really be themselves and start on a path of self-love.