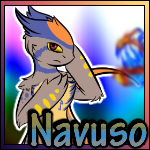 Adamant / Unsure of himself

The well known virus of the pokemon universe, Pokerus, had changed over the decades. It adapted and altered how it affected others.

When Charma was just an egg, he got infected with the virus and instead of having the original effects, it altered how he looked and his typing. When he hatched, he was furry and his colors were different. He was still a charmander, but didn't know why he didn't look like any other Charmander that he met. Most of them shunned him, so he's kind of exploring, trying to find a place to settle where he'll be accepted.