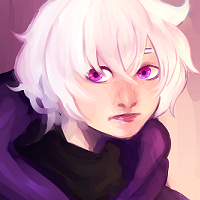 Interrupted by Opine destroying everything and subsequently being destroyed in return. Oops.

October 2014 in his finalized form, but he existed as loose AU ideas for a while before then.

Himself, failing, manipulative behavior, pressure, conflict, most of the things Dicro dislikes.

[The original Dicro's bio should be read before this one!]

He ruined everything. Everything is his fault. He can't pretend he's a good person anymore. He was a fool. If he hadn't existed, everything would have been fine.

An Entirety is dead and ruined, all by his hand. He knows this. All he can do is try and prevent the same thing happening in another Entirety. He came here to die, but if he can save another Entirety, another Dicro in the process... it won't make up for anything, certainly. He'll never be able to forgive himself. He can't fix anything he broke. But he wishes someone had told him what he plans to tell this Entirety's Dicro.

Needless to say, 2cro is a shaken, broken version of Dicro. He's weighed down by guilt, grief, and paranoia. However, he's determined to find Dicro and will act coldly and without mercy to those who get in his way. To those who seek to help him... he doesn't know how to respond. All he ever wanted was to be approved of and loved, but he feels any kindness toward him is undeserved.

In another Entirety - another realm of existence, an alternate set of universes and Realities - Opine Frazil destroyed the Test Reality and everyone in it. This Entirety's Dicro Corrune - 2cro, for the sake of clarity - only survived due to the multitude of connections his soul had to others because of his subconscious exploits.

Having nowhere else to go and no one else to turn to he dedicated himself to Ignis Phasmatis, the man he subsequently helped to take over Entirety. More violently, more angrily than he intended, certainly, but it that didn't bother him at the time. He was angry too, more upset than he cared to admit.

When they finally did it, though, when they finally took over, it just wasn't enough. When Ignis went too far, he did nothing. He listened, followed orders, did things he never imagined himself to be capable of. He stopped sleeping, unwillingly. But what else did he have? What else was there for him other than Ignis' approval? Nothing that he wasn't blind to.

"I will become a being of destruction," he told himself, "I will become cold, unfeeling, unflinching, unstoppable. I will shed blood unconditionally and without mercy. I will become everything he is and more. And then I will be loved."

This facade was one he couldn't attain. It was a mask that didn't fit. But he believed if he kept telling himself he was a monster, he would become one. Surely things would get easier - how hard could it be for him to abandon his humanity in such brutal circumstances? But it only got harder, the roots of shame and regret only grew deeper, stronger. Echoes of the world before rang in his ears, ghosts from the past spoke in pleading whispers to remember who he used to be. "This is wrong," they told him, "why would you let this happen?"

What living fragments of his memories survived spread in hushed voices words of rebellion, words of war - a war where 2cro was either with them or against them. If he refused to fight, there was nothing to be done. It was a two-man war, and 2cro was the only one who could ever serve as the opposition.

Everything within him was a conflict. Even as he destroyed everything he touched, even as he took Entirety for himself, he didn't know what he was supposed to feel anymore. He felt everything and nothing at once in perfect harmony.

Victory came without reward, just as loss would come without consequence. He just wanted to be alone. He didn't want to have to think anymore. He wanted some kind of peace. And as he willed it, the world became empty.

Alone with his emptiness for eternity and then some, 2cro sought an end. Death, once a dear friend of his, was now a stranger that beckoned him from unfamiliar places. How was he to reach it? Could someone of his level ever hope to find it again?

"I'll destroy myself," he decided, "I'll leave this Entirety and cease to be."

He had more time than there ever was, and he dedicated it to researching how he could possibly travel across Entireties. Such a thing had never been done as such a thing had been assumed to be impossible - that "Entirety" could be used in the plural was little more than a theory. There were stories of those who attempted it and disintegrated or vanished to never return, both of which sounded just fine to 2cro.

As the time drew near to act, the idea that his fate could prevented in another Entirety pulled him forward. Imagine: he could cease to be at last while at the same time keeping another Dicro from becoming like him.

He accomplished what couldn't be done and arrived in another Entirety - more alive and intact than intended, for better or worse.

2cro has the same powers and abilities as Dicro does, though they're much stronger. He has a host of other abilities thanks to spending most of his existence around Ignis and thanks to having so long to develop his Marionettiste ablities, but he'd rather not use them.

It's not exactly a power, but due to this Entirety's inability to fully comprehend his existence, 2cro's mannerisms can only be described as "glitchy". His visage often flickers between different expressions, his movements are jerky and sometimes loop, parts of him will briefly vanish or align themselves elsewhere, he'll dissolve into static, so on and so forth. Because of this, it tends to be difficult to understand his words. They sound as though they've been run through a low-quality filter with sections cut out entirely (which is represented in RP by having his text rn through the Zalgo generator).

He doesn't seem to be entirely aware of his "glitchy" nature and will continue a conversation as though he didn't just pause and cycle through a million different emotions in the middle of a sentence.