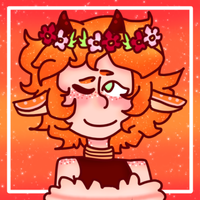 female satyr her she NFT NFS My baby

Q: How do you BLAZE A TRAIL IN THOSE HEELS?
A: Magic & willpower, Babey

Her actual name is Piper, but Pippa is a a nickname beside Pip that she doesn't mind being called by her friends. Other than that.. it's a don't.
Piper is a rather easygoing, polite, and optimistic satyr. She was taken under the wing of a single, elder alchemist after being discovered alone as a toddler. The woman raised her as her own, teaching the child her craft and finding joy the company. She decided to care for her because she knew how difficult it can be when raised in an orphanage, as that had been her own experience. She died when the satyr was nearing her adult years, and now the girl picks up where her mother left off.

She lives in a two-story cabin that is isolated in a forest clearing, but she has no problem navigating her way to town and back after memorizing landmarks (and her sense of direction is really good). She only ever goes into town for necessities if she's unfit to find or make them herself, or if she wants to sell her wares; this includes but isn't limited to potions, foraged goods, herbal recipes, etc. She enjoys being outside whether it be rain or shine. The fresh air is a lot nicer compared to the overwhelming scents in her home.

She still holds some trauma after seeing her parents get killed by a group of ruffians who wanted to raid their house, meaning she has a hard time trusting others and it takes awhile to break down many of her social barriers. She tends to get enough social interaction from bartering in various towns, so she feels pretty indifferent towards forming relationships outside of seller/customer. While most her past is blurry from young age, her feelings remain vivid. Bias remains strong towards rugged strangers, but she still tries to treat everyone with tenderness as long as they do the same.