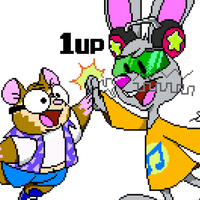 Oam and 2A are 8-bit coders from the fictional NES game Rascal. Their job is to maintain the game from any bugs, glitches, or any other problems that would affect the game as well as the player playing it.

- 2A doesn't wear pants. He only wears his underwear underneath his shirt.

- They both sleep in their briefs and they share one bed.

- They don't get out much often due to their role in maintaining the game. So you'll either see them with their clothes on or in their underwear.