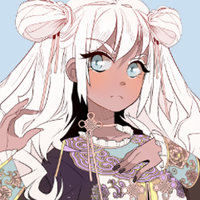 "Hmph."
Blanche stands at a height of five feet and eight inches (five feet and six inches without her heels). To go with her naturally tan skin, she has thick, very light cream colored hair to the point where it looks white, flowing down to her waist, the sides styled in loose loops. She also accentuates her face with makeup, usually going for the orange and white tones that would compliment her blue eyes. Her general attire consists of a short but intricate one piece light blue dress topped with a brown jacket with complex pink flower embroidery and golden trimmings. Upon joining the Phoenix Nest guild, she requested a golden version (or the closest gold version) of the guild mark on her right side chest, just below the collarbone and above the breast. She likes to pair these two up with white heeled boots so that she would look taller than she normally is. As for her stature, she’s always sure to make her posture straight, body clean, and manners up, being at the very least polite to everyone when interacting. She also tries not do anything that would be considered disgusting like acting like a savage, or a Valbestian. Even whenever she would feel unsightly emotions like anger or sadness, she would hide this in front of the crowd until when she’s alone. This gives her the appearance of a higher class citizen, something that Blanche always wants everyone to see her as. Wouldn’t want to have people see her as a freak, right?

Blanche’s maker magic is special. She is able to create and manipulate gemstones to her liking, be it as weaponry, shapes, or simple lifeforms like birds and the like. The ability and effect of her magic depends on the gem and its descriptions (for example, Diamond make would be the hardest form to break, while a weaker gem such as Antarcticite - Antarcticite make may be more brittle, but also easier to manipulate as a liquid than a solid), as well as her own capability and imagination on using these traits to their maximum potential. Gem Make highly depends on the user’s mind to properly create what they would want to see and how they would want the gem to affect the world. This wouldn’t necessarily require intense amount of concentration, however it would be easier for the caster to do magic with it in play. It is also possible to make complex creations with the right state of mind and sufficient ether. As a Gem Make user grows in their skill, they gain more knowledge of gems to have an arsenal of varying attacks and/or defenses. Blanche’s own mastery of Gem Make is still in it’s beginning stages. As of joining the Phoenix Guild, she can summon and manipulate five kinds of gems, each with varying tolls on her person. The first gem she learned to summon was Talc, a clay mineral at one hardness that is commonly used in baby powder. This is the easiest gem and can summon and manipulate, and while it’s not as harmful as it seems, it makes for a quick getaway option. The second gem was Quartz, with a maximum potential of seven hardness. As it was easy to summon and does main, Blanche uses it as her go-to gem in most scenarios, summoning an array of Quartz gems for long periods of time. The three other gems she can manipulate are relatively special ones that take more toll on her the longer she uses it. These are Cinnabar, Magnetite, and Rutile. Each come with their own special properties that she has just recently discovered. These are Blanche’s situational gems, only summoning when she feels that Quartz gems aren’t sufficient enough for the battle.
View More