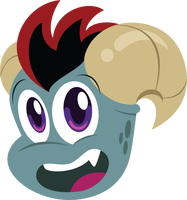 "Humans aren't so bad! Any group of people that can invent chocolate-covered potato chips deserves all the friendship I can give."

Zyra is meek, cowardly, and naive, but a sweetheart with a lot of love to give. A member of the reptilian alien race known as the Djragoni, Zyra is unfamiliar with anything outside of his small lakeside tribe and sees everything as new and exciting.

To Zyra, his birth is a total mystery. All he knows is that he was born in the icy tundras north of his current home, meaning he is of Icien decent. He is also aware he was orphaned a few days after his birth by an avalanche that wiped out his tribe (that's what he was told, anyhow). Shortly after, Zyra was adopted by a pair of lake-dwelling Ulecian Djragoni who had recently lost their first child and wanted to take in Zyra as their own.

As Zyra grew up, it became clear he was not the same as the other children. He was smaller, weaker, and more easily frightened than other young Djragoni in the tribe, and was often picked-on as a result. His only friend was another child named Kavina who was able to look past his weaknesses. Sadly, other young Djragoni were not as friendly.

By the time he reached adolescence, Zyra had successful gained a reputation of being a feeble cowardly weakling. In an attempt to redeem himself among his peers, Zyra would volunteer for a dangerous rite-of passage. A young member of the tribe would travel to a faraway destination, live in the new foreign environment, and earn the acceptance of the native people. It was incredibly dangerous and had resulted in multiple young volunteers never returning, but the respect it earned the victor was immeasurable.

Little did he know the journey would take him much farther from home than he could have ever imagined. After a little trip through the cosmos, Zyra finds himself on a totally new planet, by himself but not exactly alone. A native, who had witnessed Zyra's vessel crash in her backyard, introduces herself as Rain and the people of planet Earth as humans. Excited to meet an alien, she offers to take him under her wing and show him around, and before Zyra knows it he has a best friend. Zyra, with Rain's help and a human disguise, ventures out of the forest into the world to fulfill his mission of befriending the whole world...or at least the kids at Rain's school. He has some luck, gaining a number of human acquaintances including a brash, if somewhat abrasive jock and a dark brooding punk Zyra can't seem to get out of his mind.

Despite many roadblocks, Zyra remains good-spirited and friendly to everything he encounters (or if they're too terrifying he'll gladly run away). His positive attitude and willingness to befriend everyone has gotten him into lots of bad situations, but in the end he still comes out with a smile. And it pays off, for in the end he may just end up with many more friends than enemies...hopefully, anyway.