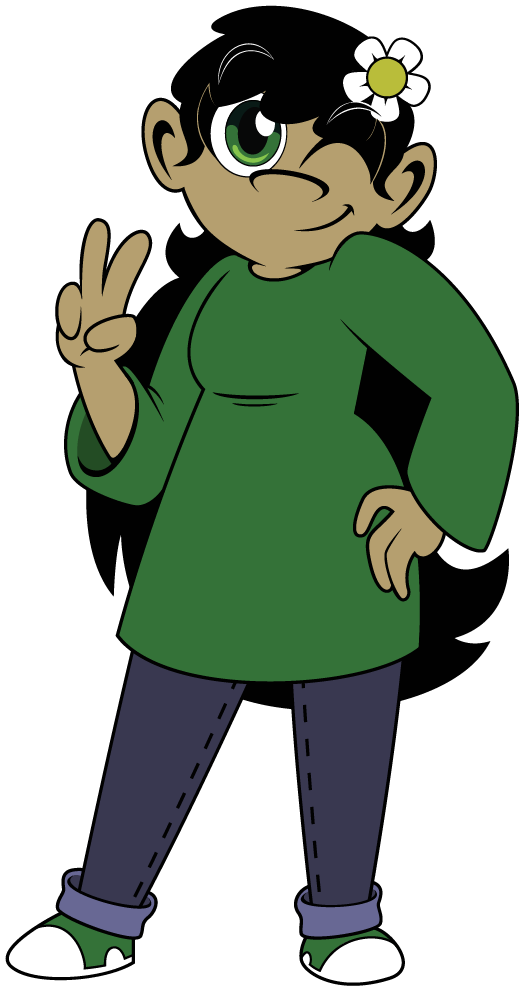 "What are you, a cop? Mind your goddamn business."

Rainstorm, better known as Rain, is a chilled-out and down-to-earth teenage girl with a bit of a morbid sense of humor. The single daughter of two new-age hippie parents, Rain is all about peace, natural preservation, and sticking it to the fat cat government. But a bit disconnected with others, Rain finds herself in the company of the forest much more than the company of people.

Born in Southern California, Rain spent the first 13 years of her life being raised in an independent co-op community. Without many other kids her age to talk to other than her cousin, Rain became isolated and found socialization difficult. When her parents saw how lonely she was, they decided to pack their bags and move somewhere fresh so she could meet new people and they could start anew. And after a long road trip out east, they found themselves in a quaint town in the Rocky Mountains named Edgewood and decided to stay.

After buying a little forest-adjacent fixer-upper with their savings, Rain and her parents get settled in their new home. With a new town filled with other young people her age, Rain is excited to get out and meet them. Being the right age, Rain begs her parents to enroll her in the local high school instead of homeschooling her again. And keeping to their promise to let her socialize, they enroll her immediately. Rain is excited to start her freshman year, but due to her lack of social skills and her anxiety, she has trouble talking to others. She joins the school's hockey team to try and make friends, but can't stand how competitive her teammates are and quits after her first season. Unable to connect with her peers, Rain spends her first year alone, but spends that year exploring the forest behind her home, turning it into her safe-haven.

Looking through her telescope one night, Rain sees a star fall from the sky into the forest and chases it thinking it's a downed satellite. She finds a futuristic shuttle crashed in the woods, and while inspecting the mysterious object, she's intercepted by another person she mistakes for a young child in a costume. But after a few quick observations, Rain discovers the youngster is actually an extraterrestrial! The alien introduces himself as Zyrathen, a kid from a race of reptile folk named Djragoni. After seeing how harmless and totally clueless to how much danger he is in, she offers to help him out. And after finding him a cave to stay in and winning his trust, the two form an alliance and she vows to keeps him safe as a gesture of goodwill (and to prove humanity can form relationships with aliens without resorting to autopsies).

From then on she shows Zyra the ropes of human society, outfitting him with a human disguise so he can accompany her to school and interact with the locals. With Zyra by her side, Rain now spends most of her time teaching him about human culture, aggressively scaring away bullies that decide to target him, and finding fun things to do with her new buddy as they grow closer as a team. And in her off time, she still enjoys exploring the forest and observing the cosmos through her telescope.