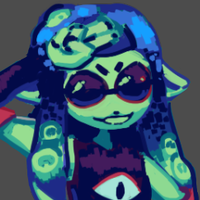 After hearing the Calamari Inkantation, Copepa yearned for something more. But as soon as she had heard it, she woke up in a strange new place and encountered a subway system and a conductor who explained that if she passed a certain number of tests, she would be able to travel to a promised land. However, once she completed all of the missions, her ink was removed and replaced with a mysterious green sludge. She was also forced to wear a pair of black and red sunglasses, although they malfunctioned at in the middle of her story, so she re-gained free will. Although with good survival instincts, she wasn't overall very intelligent, so she continued to serve commander tartar as a sanitized octoling. While commander tartar was being battled, Copepa managed to escape via an empty blender, and used it  like a capsule as she floated around aimlessly in the ocean until the blast from commander tatar's defeat sent her ashore on Inkopolis. There, she pryed her way out of the now broken blender, and dodges her way around inkopolis, watching splatfests from afar. She does seem strangely fond of Jelonzo, however. She produces beats in an alleyway on a computer she found in a dumpster.

-Her screen name, F4NGTOOTH, was inspired by another sanitized octoling, named dedf1sh. However this is also because Copepa's teeth proved useful in fighting (and biting) her way out of Tartar's underground facility.

-If forced to use a weapon, it would be the heavy splatling.

-"OH MY GOD ITS A LITTLE SEA CUCUMBER"

-Still wears her sunglasses because she thinks she looks cool

-Cries a lot when nobodys looking

-Glows in the dark!