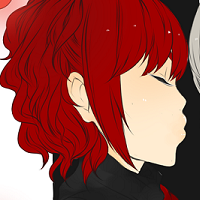 Alma is upbeat and open-minded, eager to move forward and discover new things. She gravitates toward creative solutions no matter the situation, even if it just makes things harder on her. She's easy to get along with, though she sometimes lapses into a dark mindset that tends to define her. Though a stranger might not be able to tell, she has a lot of paranoia about her relationships with others and often doubts the intentions of even people she's close to. She has a myriad of different mental illnesses, but she tries to cover them up even if it hurts her ability to be safe and happy thanks to how her family treated her for having them.

Alma is fascinated with anything unusual and/or paranormal and is completely willing to get into trouble if it means she gets to get a closer look or find some answers.

"Don't you think it would be nice to just be whisked away like that? Even if it was hard or painful, just to be in another world..."

Raised in an abusive and unsupportive household, Alma spent most of her time hiding out at friends' houses and places that weren't even houses at all. She became interested in the supernatural at a very young age and openly claimed to have had many unearthly encounters, which only worsened her relationship at home when teachers professed concern for her mentality. She stopped talking.

In middle school she met Angele when she made an unofficial "paranormal investigation club" and Alma joined with a vigor she couldn't control. The two became close very quickly, Angele's happiness serving as a motive to Alma to try and open up again.

In high school Alma had taken to staying with Angele most of the time, naturally keeping her relationship a secret from her parents while at the same time keeping the gravity of her home situation a secret from Angele out of fear of worrying her or inciting legal conflict. She focused on graduating and getting into a college far away.

Upon entering college with Angele, she opened up about her home life and expressed relief that she was now legally independent from them. Now free to pursue her interests with someone she dearly loved, Alma's future was looking bright and her outlook on life improved every day.

During college her interest in magic intensified exponentially and she expressed an ability to utilize it to some degree. She frequently visited the mysterious Ametrine Galena, much to Angele's concern.

And then, a month into her first semester as a sophomore, Alma disappeared. Distraught, Angele sought out the help of Alma's roommate, Chalcedony Lepidolite, not sure whether she should confront the "real world" or something more arcane...

Alma has some minor magical capabilities (she can use some basic spells and channel spirits to some extent, though Angele doesn't like when she tries the latter) and knows a substantial amount about witchcraft and demonology. That's about it, though.