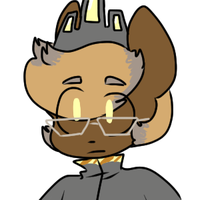 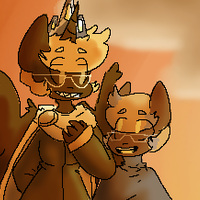 Urartu is the current High Emperor of the Monocot Empire, but the title is only a recent addition to his life. Generally quiet, reserved, and in control of himself, Urartu puts on a calm and cool farce when it comes to his duties, but many don't expect the Emperor to be a nervous young adult underneath who spends most of his free time fantasizing about not having his job.

Urartu was not originally the Emperor, but rather was Aestivum's confidant and expected heir. He was trained from near-birth in all forms of combat and diplomacy, following in the older's footsteps dutifully. Urartu was confident that he would never actually take Aestivum's place, even temporarily - the Monocot Emperor would never abandon his people long enough to require a new individual in his place, and it was more out of decorum.

Still, though, Urartu spent most of his time at Aestivum's side, learning more about the elusive warlord and slowly forming a friendship between the two. He knew Aestivum better than anyone else - almost constantly in one another's presence, it was inevitable. Their closeness was well-known, enough for the tabloids to start circling rumors about the High Emperor's secret "relationship".

Urartu never felt romantically inclined towards Aestivum. The other was his best friend, a loyal mentor who watched over the Empire like a regally-perched bird of prey. To even imagine Aestivum choosing him as a sort of consort was out of the question - why would either of them want to pursue something like that?

Regardless of their closeness and the rumors, Urartu was unable to talk Aestivum out of his next conquest: an exploration and colonization of the mystic Golden Isles, a land said to contain a pure line of mortals, who had never been touched by greater civilization and were watched over by a group of powerful lesser gods. The Golden Isles weren't even said to truly exist - many saw them as a simple fairy tale - but the prospect of fresh blood in age-old lineages was too enticing for Aestivum's competitive nature.

And, to rub salt in the wound, on the night when Aestivum's voyage was set to leave harbor, he bent the knee and admitted to Urartu that he'd harbored feelings for the Beaut since he was a teenager.

Life flipped upside down, Urartu could barely hold himself together when waving the ship off. The friendship that he had thought the two had shared - the entire time, Aestivum had been keeping a crush from him. Why? Why him? Aestivum could have had any Monocot he had desired, and yet - he had chosen Urartu.

And now Urartu was supposed to hold his friend's Empire together, with no sign of when Aestivum would be returning.

He wants to do his best, but the fear of failure and the fear of Aestivum's possible expectations when he returns home weighs too heavily on Urartu's mind to allow him peace. Desperate for anyone who understood him, anyone who had a legacy thrust onto them, he turned to Simsii, the Eudicot leader and traditional enemy of the Monocots.

Simsii understood what it was like to have something thrust onto him, and to have to try to deal with it and the way it changed the life he knew. He, too, was a leader, versed in politics and intrigue. And, under his cold exterior, he was genuinely nice.

In secret, the two fostered a friendship, culminating in accidentally letting things get out of hand and producing a child. Said child currently lives with Urartu and, while they're aware of their parents, cannot speak about it at all for fear of international war.

Tomorrow I'll be going on a vacation & doing a social media cleanse so I won't be online    Please stay safe & take care of yourself!! See you all Pyrldan 12th 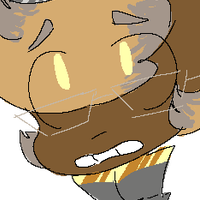 Urartu has multicolored hair, wherein the majority is a pale organish color, but his tips and eyebrows are grayish. This is not a byproduct of hair dye - it's naturally how his hair fades overtime.

He wears a gray crown on his head that is inset with three yellow gems. His robe is of the same color and has similar yellowed banding around the neck, hemline, and ends of sleeves. However, the gems are shiny like a jewel, while the banding appears almost goldlike in its luster. His pants are a lighter gray and are the same color as his glasses, which are shaped like upside-down trapezoids.

Normally, Urartu looks somewhat nervous, unless he's putting on a farce during political meetings or open court. He has few friends, but can be drawn alongside any Monocot as their leader.

• Favorite color is gold
• Favorite season is Summer
• Favorite memories are going to health checkups at doctors'
• Favorite foods are very expensive seafoods seasoned with rare spices
• Strongest sense is touch
• Strongest taste is sweet
• Right-handed
• Is ticklish in the bottom of feet
• Favorite thing about Aestivum is his elegance
• Favorite thing about Simsii is his experience
• Absolutely adores visiting petting zoos and touching all the cute animals
• Adept at chess and regularly attends championships (to beat everyone)
• Learned how to play piano as a young adult and often played during parties and important events on Aestivum's behalf
• Idly carves a chunk of wood he keeps on his person when he has nothing better to do and wants to busy his hands
• Collects berries and arranges cute temporary decorations with them
• Keeps a locket with a bit of Aestivum's magic inside, to remind him
• Also started wearing a locket with Simsii's magic, but has it hidden under his shirt
• Finds pets not cute at all, but keeps this a highly-guarded secret
• Has a bunch of fake social media profiles and roleplay profiles, only pokes them once in a while though due to work