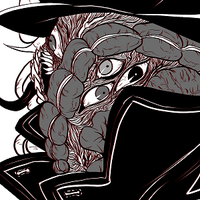 Hundreds of thousands of years old.

No later than November 2012, but probably a few months earlier??

Being stuck in a conversation with someone unbearable, needlessly cruel beings, when people he fear him (when he isn't looking to be feared), narrow-minded beings, beaches, large beds, truffle oil, seeing people who have fallen ill, hospitals, pretentious people.

A trenchcoat and fedora.

Despite his monstrous appearance and high status in Hell, Laejizhar is a kind and gentle soul. Though he still consumes souls and puts up delicious new fleshy recipes up on his food blog on a regular basis, he tries to be reasonable about it. He never takes more than he needs, utilizes underground websites dedicated to beings who have given up on life, otherwise only targets those who deserve death, ensures his targets have quick and painless deaths, and never wastes a thing.

In his old age Laejizhar has become weary and tends to find younger demons hard to get along with. Throughout his travels he's learned much about other beings and how life should be held in high esteem - that no sort of being is superior to the other, even if they're higher on the food chain. He's grown sympathetic to the plights of mortals and, facing moral conflicts he fears making public out of concern that it would make his son's life more difficult, has retired in a sense.

Though Laejizhar is normally serious and level-headed, he becomes very excited around his son, Baldasarre. He loves him dearly, which his gushing makes obvious. Unless the situation is emotional or grim, around Baldasarre he becomes joyous and lighthearted, going so far as to make loads of dad jokes. Too many of them.

As with most demons, Laejizhar came from nothing. With nothing within him but a thirst for power, he began seeking souls to devour. Unlike most demons, after he thought "hey, this stuff is pretty good" he had another thought: "but I could make it better."

Starting from the bottom, Laejizhar began work as a line cook and spent his free time experimenting with souls to see what made them the most delectable. He moved up in the ranks: sous chef, executive chef, soon enough he had his own restaurant. And then another. And another. Laejizhar became a celebrity chef, gaining his own TV show and showing up as judges on other shows. He was a star, and all because he was just doing what he loved. Life was good.

He met a woman named Adriele: an aspiring chef herself and a demon of solid rank despite being 1/4 human. They fell and love and got married, eventually having a son named Baldasarre. The next few years were wonderful, the best of Laejizhar's life.

And then Adriele fell ill. The disease originated from the human side of her ancestry, far back but not far back enough. It grew in demon blood, corrupted the soul and ate away at it until there was nothing left. All Laejizhar could do was watch as his wife withered away, helpless. When she died, Laejizhar couldn't cope. He abandoned Baldasarre - a common practice among demons, but something Laejizhar had hoped to avoid doing - and threw himself full-force into his job. He couldn't afford to be weak now. He couldn't afford to have the time to think.

Eventually he settled down and realized that he shouldn't have left his son to fend for himself, demon or not. He didn't want to be that sort of person. He wanted to see him grow strong, become more powerful than he ever was. He wanted his son to know that he was proud of him. When he returned and discovered Baldasarre had fallen ill with the same disease that took his wife, he didn't know what to do. Furthermore, his son was cold toward him, not that he could blame him. He would have been just as upset.

After some contemplation, Laejizhar decided it was about time to retire. He aimed to dedicate all of his time to his son, knowing his time with him was limited. And the time left over? To search for a way to save Baldasarre's life.

To those who seldom dabble in the demonic, Laejizhar is a terrifying sight to behold. He appears to be a humanoid mass of viscera, resembling a mess of skinless humans mashed together into a larger being. Eyes and mouths are dotted throughout his "flesh", often moving in unison but not always. His arms end in tendrils, though if he so chooses he can form them into something more closely resembling hands. Laejizhar is capable of manipulating his appearance to some extent: for example, while in more human-populated areas he'll often shift his extra body parts beneath his clothing to form a more human-looking visage.

As for his offensive techniques... rest assured you won't be leaving alive if you get into a fight with him.