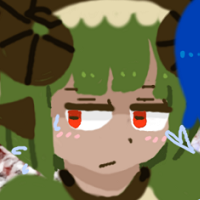 A powerful demon who once held Hell in her grasp and was one of Hell College's most feared students. As time went on, though, Hattie became increasingly disenchanted with always winning and was bored of being on top. She abruptly dropped off the radar, baffling everyone who had ever heard of her.

Hattie began taking odd jobs in "lowly" professions, working dutifully but always with an arsenal of snark. She's currently serving as the caretaker of a demon named Baldasarre Adarez, aiding him in living a comfortable life and coping with his illness. It's a pretty posh gig, but that's done nothing to drain her of deadpan one-liners and sarcasm.

(Role not provided for RP-original settings.)

Hattie is mostly introverted and flat-faced, seldom speaking unless spoken to. She's perfectly content being alone, but she doesn't shut down in large groups. For the most part she seems emotionless, with her only moods appearing to be bored, snarky, irritated, and relaxed. Hattie doesn't feel much in the way of empathy due to demonic nature, far more focused on money and following her whims. Still, compared to most demons she's relatively human and can be surprisingly understanding and sympathetic at times. Don't mistake this for patience, however: when bothered or kept from things she becomes ruthless.

Hattie a remarkably hard worker, willing to take on all sorts of ridiculous and undesirable jobs without complaining (though she might mutter something snarky). Even if she isn't getting paid, she just enjoys completing tasks. Working is something that relaxes her, and she has a deep appreciation for mindless work.

Hattie is often mistaken for a child due to... well, looking like a child. She doesn't mind it that much, since that tends to get people to underestimate her... though she gets really annoyed when people start pinching her cheeks and telling her she's adorable. She doesn't know how to respond to affection and will usually just stand there glaring when flustered.

Hattie's most prominent attribute is her youthful appearance. Despite being an ancient and powerful demon, she looks like a teenager at best. A demon of her level should have no issue altering their body, so it's unclear why she doesn't make herself look more mature when she gets annoyed at others for assuming her age. Maybe she wants to be underestimated? Maybe she just likes being teased for being super adorbs? The world may never know.

In the Hell Hattie is from, being a Pride Demon is indicative of both method of soul collection and species. Like other Pride Demons, Hattie has curved horns, rectangular pupils, goat-like ears, a goat-like tail (which is typically hidden under her clothing), and a large pair of wings that sprout from the middle of her back.

Ever since giving up her extravagant life as a Demon Lord, Hattie's pretty much never been seen outside of some sort of work uniform. In particular she likes traditional maid outfits, especially ones that are fairly conservative. She doesn't accessorize much or do much else with her appearance, leaving her coming off as fairly plain.

Hattie is very still and flat-faced, making her difficult to read. She hardly moves at all while speaking and her expressions are limited at best. Her poker face is legendary. Such control over her body language is expected of a powerful demon, but the truth is that she's usually pretty bored and feels neutrally about most things. Of course, she can actively suppress her emotional expression to intimidate foes and all that, but she generally doesn't need to.

A lot like autumn. Warm, earthy, and full of spices.

Hattie's voice is exactly as youthful and deadpan as her appearance would suggest. Adorable and full of loathing.

A long time ago, Hattie was a feared demon of immense power. She attended Hell College, graduating with tremendous marks and passing the notoriously difficult graduation finals process with an impossible ease. Not content with the idea of becoming a professor there, she returned home and ruled over sections of Hell with an iron fist. She faced endless challenges from weaker demons who sought to wrest control from her and spent her days fighting and disposing of their sorry souls. All of their efforts were worthless: Hattie proved to be unstoppable.

Which got really boring after a while. As it turns out, it's not exciting to consistently be the best and most powerful. Winning all the time gets dull, as does being on the top in general. Worse, she never really had any free time because it was being constantly sabotaged by her wannabe-rivals.

Incredibly disenchanted with her lifestyle, Hattie "quit" and relinquished everything she had conquered and earned, instead seeking out small, quiet places and busywork. Wanting to see what it was like on the other side of the coin, she became interested in service jobs. Her name began to fade from public interest as newer demons clamored over her old role.

Eventually she found herself employed by Laejizhar Adarez, who requested she take care of his ill son, Baldasarre. She accepted and has been living with Baldasarre since, working to make his life easier. And also getting free food, electricity, and wi-fi. And money. Lots of money.

Hattie has super strength and defense, making fighting her like trying to battle a brick wall. If that wasn't enough, Hattie also has geokinesis and telekinesis, ensuring that even if she's physically constrained she can still fight.

More alarmingly, Hattie can erase things from existence. Send 'em right to the void. She can't erase living beings, nor can she erase large things or things in massive quantities. If it gives any indication of its limits, she usually just uses this ability to empty dustpans into the abyss and store cleaning supplies. She seems to have more skill with this power and more control over "the void" than she displays or admits... but how much more powerful is she?!

As a Pride Demon, Hattie obtains soul energy from others by being worshipped, revered, and praised. She's collected a substantial amount of energy throughout the years and hasn't expended much of it. Additionally, it seems she's still collecting energy despite her retirement... but from where?

This section only contains IC details about Hattie's most important connections. For more connections and more details on the connections listed here, please view her links!

Monue  // Avoid: Hattie! Nothing personal, she seems alright, just not my cup of tea. D: <3

ISO'S OC QUESTION OF THE DAY

Q12. Which of your OCs is the shortest?

Hattie is probably the shortest for her age, though, standing at a diminutive 5'0" despite being hundreds of thousands of years old and a former demonic conquerer. Adorable!

Q46. Which of your OCs' looks are the most deceiving?

Hattie takes care of Laejizhar's ill son, but despite her harmless and youthful looks she used to be a demonic conquerer and is still incredibly powerful.

Q59. Do any of your OCs' names have special meanings?

Hattie and Cecile are both just "old lady" names that I wrote down and decided to use.

Q62. Are any of your OCs in relationships?

Hattie is kinda-sorta dating a succubus named Vizelia Viviendela, though she doesn't really talk about it. Vizelia flirts with her, Hattie replies with unimpressed mutterings, and then they'll just suddenly go out on a date or make out or something?? Vizelia is clearly interested in Hattie, but Hattie's true feelings for Vizelia are kind of ambiguous and stuffed under layers of apathy.

Q117. Which OC of yours has the most uneventful life?

Despite being a former overlord, Hattie probably has the most ordinary and dull life. Her setting is fairly extraordinary: she works as a maid and caretaker to the dying son of an extremely well-known celebrity chef, also she's a demon and all of this is in Hell. But her day to day life is very simple. She cooks, cleans, makes sure Baldasarre (the aforementioned dying son) is comfortable and not dying very quickly, hangs out with her Definitely Not Girlfriend, and gets loads of dosh to mostly spend on expensive tea. She's had her fair share of adventure, so now she prefers the quiet life. It's nice.

Q165. Which OC of yours enjoys autumn the most?

WHAT DOES YOUR CHARACTER THINK OF THE CHARACTER ABOVE YOU?

Marion  //  The bunny stared at the ghostgirl with a critical eye, feeling his leg begin to detach itself once more (the third time that day!) from the rest of his body. Rubbing his hand against his chin as he feigned some sort of intellectual epiphany, and with a snap of his fingers spoke: "You're short."

Hattie  //  Please be more careful with your limbs. If I trip over one, I'm going to be annoyed...

Royale  //  Royale gestured excitedly as her claws, horns, and spikes began to glow a bright blue, "Ya look so bored! Lighten up a bit!"