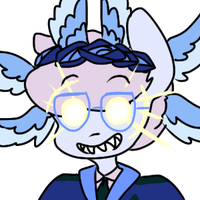 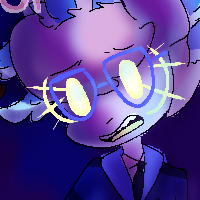 Archise is loud, confident, and the instant he walks into a room, his presence demands attention. It's hard to ignore him when he's breathing down someone's neck with a grin, awaiting their nervous response to whatever terrifying question he just posed. Archise is more than aware that he's intimidating to others and takes it in full stride, enjoying being able to influence the emotions of other Fragments so much.

Still, everyone sucks it up - because Archise is absolutely integral to the Coalition of Reality's charge against the Shards. A mixture of genuine raw magical power, combat expertise, and sheer impulsivity mean that Archise is hard to predict and even harder to plan around, making him a viable candidate for most strategizing against the Shards. Some would call Archise's behavior reckless, but he would rather call it audacious.

When off the battlefield and out of the war room, however, Archise doesn't have much else. His general personality means few are willing to bother getting close to him, and Archise himself rarely seeks out friends. While he doesn't often mind being alone most of the time, he does sometimes feel awkward about it, finding it hard to express when he's happy or depressed about something as he's worried that it would be strange to vent in any fashion to, essentially, strangers.

The lack of intimacy and steadfast support has driven Archise into a strange position - unwilling to drop his intimidating persona, but aware that bottling emotions isn't healthy, he usually ends up oversharing to those who spend even a slight amount of time around him willingly and dumps all of his trauma and built-up tension on them. Understandably, this doesn't really improve his friendships at all and usually results in more problems.

His only constant support is Ichesra, who he considers in a sort of familial, brotherly bond. Ichesra doesn't appear to mind Archise going off about whatever new monster of the week is stressed him out - although it's more out of boredom and frustration than actual genuine affection. Still, ranting to someone busy reading a book is better than ranting not at all, and Ichesra ended up Archise's beloved crutch.

In an effort to show his gratitude, when Archise was promoted to Overseer of Research & Remove in order to form his small band of Anti-Shards Fragments, he offered a high-ranking position to Ichesra, who had previously been in Rest & Reformation. Ichesra had tried to turn it down, citing his lack of experience and interest, but Archise pushed for it so ridiculously hard that the other Overseers overruled Ichesra's wishes and assigned him a status as general.

Archise has no idea how much this has pissed off Ichesra, and is oblivious to the other's mounting irritation at both Archise and his reckless abandon.

Archise is a walking Magninium tank, full of so much magic that his body naturally expels an obscene amount every second to stop his body from exploding. This is most evident in his eyes, which are so affected by the leakage that they've become essentially white holes of Magninium, leaking constantly and distorting slightly. His magic color, however, is yellow.

He wears a very particular outfit - a blue suit with darker teal embellishments in the form of stripes and a star, as well as a flower crown of blue roses. These roses accent the six wings that sit atop Archise's head, which mimic his emotions, but do not move of Archise's will.

He has the sharp teeth mutation and wears glasses overtop of his eyes - please don't forget these details! Archise can be drawn alongside any other Overseer or Ichesra, although the former is more likely. 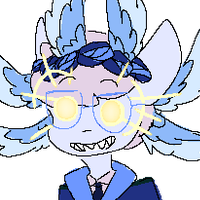 • Favorite color is blue, duh!
• Favorite season is Spring
• Favorite memory is being assigned as an Overseer
• Doesn't understand eating, but likes food aesthetically
• Strongest sense is touch
• Strongest taste is bitter
• Ambidextrous
• Isn't ticklish; you're foolish for trying
• Leaks so much Magninium radiation that he'd roast the Earth in a second
• Has and will continue to awkwardly misuse old memes with a total lack of social grace
• His wings do not require preening, but Archise wouldn't mind someone preening them for him anyways (the intimacy sounds tempting)
• Favorite coworker is Valentine, just for sheer novelty
• Favorite subordinate (?) is Magnotris
• Pretends he's completely unaware of why he doesn't have any friends