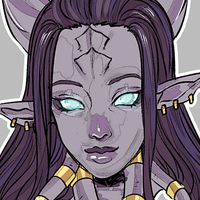 "It's dangerous to daydream."

Many will describe her as orderly and responsible, the type to make sure plans are properly organized before going along with them. However she's also short-tempered and stubborn, not easily adaptable to new situations. Despite being quiet most of the time, Mesdorah always keeps a smile on her face. She's not aloof nor mean, a kind spirit who has the habit of keeping to herself - unless when someone disagrees with her opinions. Most will agree that she bares a motherly deposition, whether in the way she acts or in her tone of voice.

Born to Caregiver Istraa and Vindicator Thordiir on the Genedar, Mesdorah was a curious child and twin sister to Mahoraan. Carefully coddled by Istraa in an attempt to preserve her childlike-ways, it wasn’t long until she wanted to follow in Thordiir’s footsteps to serve the Light. She intended to support her people, despite Istraa wanting her to become a caregiver like herself.

Mahoraan and her had a normal sibling relationship. Neither were too close nor too distant, and both continued down their diverging paths - one a vindicator and the other an anchorite. Mesdorah especially found her curiousity to wander, quickly turning into a social butterfly who took on too many chores at once.

During their travels on the ship, she became increasingly close to fellow vindicator-in-training Bran'ir. Whether it was his 'goofiness' and tendencies to trip over every hoof, one could say she was a puppy for him - and Bran'ir felt the same towards her, although oblivious at first.

It was evident she attached herself to him after Mahoraan boarded the Xenedar alongside Istraa, leaving Thordiir and herself to remain on the Genedar. Saddened by their departure, she kept studying in the ways of the light to become as recognized as a vindicator her father was.

Upon landing on Draenor and settling in with the other inhabitants, Thordiir retired as a vindicator and became a ranch hand, tending to the local talbuks of Shadowmoon Valley. Mesdorah continued training in the ways of the light until she was finally recognized as a holy warrior.

Mesdorah and Bran'ir moved to Karabor after their successful marriage - although one can argue that 'he shouldn't have sung' to catch her attention before proposing. Wanting to start a family, she put her duties on hold and tended loosely around her father's farm upon announcing that she was expecting her first child.

It wasn't until after the corrupted orcs began their assault did Mesdorah give birth to a son - Naamos. She hid her family in the corner of Karabor while Thordiir and Bran'ir took up arms and fought in the front lines while she protected her son. Phiiria - a close friend of Mesdorah's, acted like Naamos' caregiver as she put her vindicator training to the test to help the falling city.

However once the city fell, Mesdorah was too preoccupied in helping the draenei citizens escape to ensure the escape of Phiiria and her son. Abandoning her post, she attempted to rescue the two by fighting off the orcs. As she was about to grab her son, she was knocked to the ground in a state of temporary paralysis, watching as Bran'ir went to grab Naamos but was struck in the head in the process. Naamos' screaming echoed in Mesdorah's ears for days to come as she recklessly fought her way through the horde, even as she was almost captured at one point.

She and Thordiir used their powers to heal any injured Draenei as they followed the rest of their kind on the Exodar. Mesdorah was quiet for the days to come, trapped in her own sphere. She didn't feel like herself - and with everyone suffering equally as bad, kept her emotions bottled up.

After they crashed-landed on Azeroth, Thordiir was paralyzed as a consequence of this and refused further healing - demanding their powers be used on the rest of the Draenei due to his stubborn yet selfless nature.

Mesdorah eventually abandoned the Exodar long after their introduction to the Alliance and their races, becoming a wandering Vindicator despite Thordiir's disapproval. She tried her best to lend her strengths in any wars the Alliance faced - especially fighting against the legion.

She learnt of her brother's presence once they connected with the Lightforged on Argus, however Istraa unsuccessfully went through the trials. Although reconnecting with him and his friend, Noraah, she couldn't continue the bubbly facade and eventually continued on her own way. Despite being appreciative of her brother's life, she still mourned the loss of her husband and child years ago.

Due to these events, Mesdorah has become more of a stern Vindicator who rarely reveals much of herself, but always keeps a smile on her face as she too knows that the future is yet to come - and will require her to shape her own destiny.

She still continues to practice jewelcrafting on the side as a strict hobby, and lives - although is rarely present - on the Exodar with her father.

Loves to take long baths and just lie there, whether she's reading or listening to music

A complete set of Praetorium Armour which she dones on a day-to-day basis.

Her trusty hammer which she almost never leaves home without. Great for skull-smashing and letting out your anger, 10/10 recommended.

A necklace she made for Naamos which she now wears 24/7.