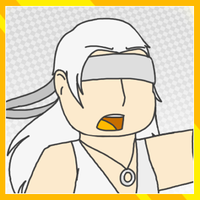 Orion is an incredibly powerful figure among the Metamo crew- one of the almighty Seven Sages of Hevendor! Not even these heavenly beings are immune to Meteo's onslaught, it seems, and it was Orion who chose to step forward and represent the Sages on the Metamo Ark, in order to save both his kind and the universe at large. Among the rest of the crew, he's a bit of an enigma- a man of few words who spends most of his time in either his room or Aatami's; the two seem to get along rather well. It's likely down to how similar their personalities are.

With his extremely powerful psychic abilities, Orion is able to manipulate Meteos as if they're mere toys, and it's always good to have him around in any situation. That said, he's not really one to offer his hand unless he's absolutely needed, or it's Hevendor the Ark has stopped by- since he's just about the only one who can handle the odd physics of Hevendor properly. As a sort of trade-off to his incredible power, Orion is extremely frail, with his body depending so much on telekinesis that it's become very weak and fragile physically. He hardly even uses his hands for things anymore! Part of the reason why he never leaves his room is that exposure to most other planets' environments could get him hurt extremely easily, with Gravitas in particular being one of the only things that seems to actually scare him.

Orion is constantly hovering about a foot off the ground, making his already-tall stature absolutely towering- reaching even over your average Freazer. With his feet on the ground, he's about Cedar's height. He's able to sense the world through a psychic field, and wears his blindfold because being able to see on top of that is overwhelming and painful for him. Only a few people have seen what his eyes look like.

His voice sounds echoey and flanged, and when he sings he can sort of do his own harmonies or even sound like a whole choir if he wants to. You...don't want to hear him shout.

He's rather fond of smooth jazz. Not that he'd ever tell anyone.