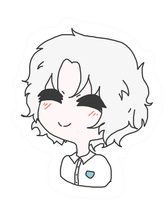 Appearance Description: Jo's real form is a grey spiral bacterium, like an incredibly small worm or noodle. Jo can't be seen with the naked eye, and at 6um long, 0.2um wide, they're just barely wide enough to be visible with a light microscope.

When their human shape is active, Jo is a short, 4'5", androgynous person who appears to be somewhere in their late teens to early 20s. Aside from their light grey eyes, they look albino, with smooth white skin and white hair. Jo's hair is mostly kept short, with a few longer strands here and there. They look human on cursory examination, but are much smoother to the touch, especially their hair, they bleed a greyish liquid that isn't blood, and internally they are still a space worm. They don't have any fashion sense, usually wearing whatever's available, and they tend to stick with monochrome clothes, finding colours a little too confusing. Both their movements and speech are clumsy, awkward, and uncoordinated. Their lack of experience with any interaction or their body quite obvious.

A non-human being who spent the bulk of their long life floating on a rock with no social interaction of any kind, Jo is really just starting to develop a personality. They are beyond naive, with no concept of morality, distrust, gender or emotions. They are absolutely fascinated by geology, by the large variety of the planet, but are more interested in exploring things than people. Jo easily picks up facts, but is unsure how to form connections or relationships. They are emotional, but still severely lacking communication skills. They have a solid sense of self because their self and their dreams was the only thing they had for so long. Even though they're still illiterate, Jo's favourite book to be read is Horton Hears a Who, and "A person's a person no matter how small" is a quote they live by.

Magma Manipulation - Jo can now generate and manipulate magma. They can only generate a ping pong sized ball of magma every hour on their own, but they can control up to a bathtub's worth of any magma within 10 feet, mentally shaping and moving it. They can also control the heat of the magma from 50°C to 1500°C. They are immune to the heat from their own magma, but not from other sources. Once their pingpong piece of magma is out of range, it behaves like normal magma.

Limited Remote Viewing - Can't shut off or control yet. When they dream, they get brief (a few seconds) visions from the nearest planet/moon that has at least one living, sentient being on it. But they can only see non-living objects and can't see into buildings or choose what they see. Mostly it's like looking at realistic photographs of barren landscapes or still lifes.

Modified "Human Shape Charm" - Technically a human size charm that has been modified to include a glamour that allows Jo to appear human while maintaining their bacteria nature. The enchantment has been placed on a liquid injected into the bacterium, which must be replaced every year or it will start to run out. Allows Jo to "shift" between bacterium and human form in 15 minutes. Jo cannot maintain human form while sleeping or unconscious.

Eidetic Memory - Has a perfect memory when it comes to sounds, not visual, enabling them to pick up language and heard facts quickly, this does not give them any extra skills or ability to use this knowledge. Can still have their memory fooled by things like illusions or magically altered.

Space Survival - Doesn't require oxygen to breathe, but low energy without it, can't move more than a crawl. Temperature-resistant from -250 to 250F. Slows down and still feels uncomfortable at the extreme temperatures, but won't be ill. Can survive in a vacuum. Immune to UV radiation and cosmic rays.

Immune to poison/disease - other bacteria, viruses, and non-magical poisons have no effect.

Functionally immortal/ageless - will live until killed by outside sources.

Regenerates - They can regenerate from regular physical injuries in minutes as long as they have a food source. This applies to most non-magical damage, but not damage from fire, magic, or any of their weaknesses.

Diet - Eats electrons from iron and other ferrous metals or directly from electricity. Gains no benefit from any other food

Tiny - Could easily be misplaced. Needs human form to interact. When human form is inactive, can only be seen with microscope.

Antibiotics - If they swallow antibiotics, even a small dose could break them down and be fatal without immediate medical attention. Antibiotic creams, ointments, and toothpaste will also severely injure them if it touches their skin, and could kill them. It stops their regenerative ability completely while touching and for 10x as long as it touched them.

Hand sanitizer - Also burns their skin, leaving third degree burns in minutes and stopping regeneration in the area touched until it's washed off. Could kill them, but not as quick as antibiotics.

Alcohol and Vinegar - Both act as strong poisons. A couple of teaspoons swallowed would require medical attention. Burns after a few minutes of skin contact and stops regeneration where it's touching until removed. Potentially fatal, but not as dangerous as antibiotics.

Malleable Mind - Easily affected by mental commands and memory altering magic. They have no resistance and can't distinguish their own thoughts from others even with regular telepathy. Magic that alters memories wears off twice as slowly.

Audio-Visual Processing Difficulties - Has no ability to pick up social/emotional cues from tone, expression, or gestures. They can't discern sarcasm or differentiate between happiness, anger, or fear. They are almost completely colourblind. And they can't interpret quick movements. Something like waving wouldn't get their attention, and they get almost nothing from watching people dance or fight.

Jo has no idea when or where they were born. Whenever it was, it was 1000s or millions of years ago on a larger asteroid than the one they lived on for the bulk of their life. A crash with other space debris left the single bacterium alone with their dreams, doing nothing but sleeping and eating.

Eventually their chunk of asteroid hit a passing spaceship and they ended up on its hull, then on the Manta Carlos space station. Jo was there for a few more years, very confused by their new visions, until a telepath made contact with them.

Fortunately the telepath didn't dismiss them and after much trial and error they managed to get onto a microscope slide to be seen. The bacterium was set up with a modified "human shape charm" and name, then given extensive education for about three years on the space station. until they were able to interact with the general public.

They've just been transferred to the main academy and put in remedial classes now that they're able to speak mostly intelligibly.

Resources: Lives at school and receives a small allowance for extras.