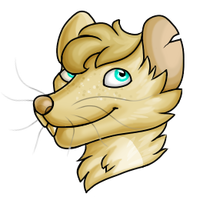 Adult (equivalent of a human in their late 20s/early 30s)

Somewhere in the woods

Heteroflexible & single; has mostly given up on love because nobody likes him

Bea (bird daughter); has other relatives as well, but they rarely visit

Jeremy is a rat who lives in a little tree-trunk burrow along a popular hiking trail in the forest. He has a very creative mind, and he loves to build things using bits of trash left behind by humans. He's built everything from useful household items, to art pieces, to even musical instruments (he has a banjo that he made using a bottle cap, a straw, and some string, which he likes to play frequently). Although he tries to put everything that he collects to good use, Jeremy does have a bit of a hoarding problem; his tree-trunk home is stuffed to the gills with human trash that he just can't bear to part with, because you never know when he might need it for a project. In addition to his disheveled abode, Jeremy never really mastered the concept of personal hygiene, so he's kind of stinky and is typically looked down upon by the other forest creatures as being a "totally gross slob". He doesn't really have any friends as a result, which weighs heavily on his self-esteem.

One day, Jeremy's life changed forever when he stumbled upon a bird's egg lying on the forest floor. At first, Jeremy had planned to eat the egg, thinking that it couldn't possibly still be viable after having taken a tumble from a tree; but, much to his astonishment, the egg began to hatch right in his arms. Jeremy then decided to raise the birdling as his own, and becoming a parent has given Jeremy a completely new perspective on life. His bird-daughter is now practically the center of his world, and Jeremy is constantly striving to be a good role model and to overall become a better person for her.