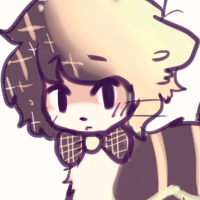 Dogs, being threatened, loud things, seeing Silliman hurt, pain, the cold, getting wet, being picked up by strangers, being stuck in cat form when Silliman's not around.

Sleeping in the sun.

Kanon is shy, nervous, and afraid of just about everything. It's a wonder he's been able to survive at the Crossroads for as long as he has, though admittedly screaming and running away from everything that threatens you does tend to help your chances of survival. He's easily frightened, easily embarrassed, and easy to make cry. He has a hard time trusting people even when they treat him kindly, so he spends most of his time hiding behind his brother for protection. He likes to make others happy, but he gets too anxious to do things for others and tends to get faint when people respond to in actions in any way, whether they reciprocate his kindness or berate him for it.

Kanon and his older brother, Silliman, managed to get themselves lost as children, winding up in the Crossroads: a chaotic Reality where other Realities meet and spit out whatever unfortunate souls accidentally walk into rips into the fabric of reality. They stuck together, but it was difficult defending themselves when Kanon was a cat every day and Silliman was a cat every night. They traveled from place to place in search of a way back home, but they didn't find anything. They lived on odd jobs and scraps, sleeping on benches and in parks. The older they got, the more Silliman started getting into fights, usually seeking to steal valuables and money from others. Kanon felt incredibly guilty about this and worried for Silliman's safety, but Silliman insisted that he was going to protect Kanon and make sure he was happy and healthy no matter what he had to do.

One day Silliman participated in a fighting tournament hosted by Vibrance Lord Azimuth Azimech, a Head (essentially a gang leader) who was famous for granting wishes for those who managed to sufficiently entertain them. Despite being incredibly overpowered, Silliman somehow managed to pull through and win, catching the Vibrance Lord's attention. They offered Silliman a place in their inner circle, which Silliman accepted under the condition that they were to allow Kanon to come with as well. Azimuth agreed and also offered Silliman a wish, which, long story better saved for Silliman's future bio short, he used to make himself more suitable for combat.

Kanon now lives a cushy, pleasant life in the Vibrance Lord's palace with Silliman, though now he has to worry about his brother getting himself into increasingly more dangerous situations...

Kanon is a werecat, though sort of an unusual one. He's human (though with cat ears and a tail) by day and an adorable cat (though with abnormal traits such as hair, complicated markings, and a thicker tail that make it clear that he's not an ordinary cat) by night. During a new moon he's locked into human form and during a full moon he's locked into cat form. Needless to say, this is all pretty inconvenient for him!

It does have a few perks, at least; in human form he maintains his cat-like reflexes, ability to see in the dark, heightened hearing skill, etc. He can also understand the language of animals in either form and likewise animals are able to understand what he says.