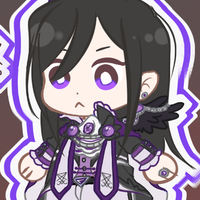 About: Prideful, arrogant, self-centered and somewhat selfish. While his mind is brilliant as he is incredibly smart and cunning, his soul is cold and he is unaffectionate 99% of the times (if headpats for Leviathan don't count). Is is VERY opinionated and his headstrong nature makes it hard for him to take into consideration other people's ideas. He stands his ground fiercely once he is sure of something. Albeit being curious he is not nosy. It's really difficult to entertain him, but he seeks to be distracted with art and music, as he once used to be the angel of such arts (namely poetry, plus a few traits such as grace, etc), but seems to be unable to find something "good enough" to please him. Very composed, but his wrath is something to be feared (or joked on, depending how brave and up the social ladder you are). He is easily annoyed and in a grumpy mood. He has a grandiose image of himself, as his ego huge, but it is mostly kept to himself. Is he incredibly insolent and cocky, the worst thing that someone could do to him would be bossing him around. As an angel he was used to being called beautiful/talented/etc so he's not particularly grateful to be called any of that, as he got used to it over time. Back in the days, while his intellect, ego, pride and insolent nature was still very evident, his company was definitly more enjoyable: he used to be graceful, nice, friendly, very forward and gentle to those closer to him. He was maybe a little bit spoiled being among the favourites.

Relationships: He has a deep bond with Beelzebub and Leviathan and puts his trust in them, especcially in the former, as he sees him as more reliable and professional (also because he knew Beelzebub way before he got to know Leviathan, and Beelzebub actually used to be of a higher class than him). All his other (important/relevant) underlings aren't deemed trustworthy by him and he knows that they would betray him and his cause if it beneffited them. His hate goes to Samael/Satan and all his old peers up in Heaven.