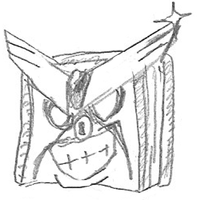 No one knows from whence the one they call The Mighty Bookman came...to hear him tell it, he emerged from the jungles of Mexico int he time of the conquistadors, as a great stone mask. Fond of the macabre, a bookmaker unknown to time sewed the mask into the cover of a great book of collected occultism, which thanks to powerful forces at work attached to his stone form, gave the grimoire itself life!

From there, it escaped into the world and compulsively searched for knowledge, gathering more and more until it reached a threshold of sapience and came to understand what it meant to Be. Fleeing the horrors of the Second World War, he ended up in the company of one Father Sergio Benitez, who would come to be known as Fray Tormenta, Mexico's first luchador. Inspired by his noble example, the bookman donned the mask, took up human shape, and cast out into the world in search of wrongs to right and justice to be served as...LLL! THE WORD WARRIOR!