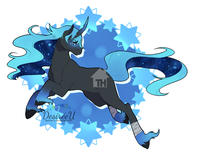 { bold . protective . aggressive . reserved . loyal . thick shell, soft core . wary }
✧✧✧
A young unicorn from another forest, seeking a new life after her new status as a "fallen" unicorn. Devoted to Rosamund because of her kindness and lack of judgement, Skylar will do her absolute best to protect her...even if it means protecting her from someone she loves.

Skylar is a young, impulsive unicorn, daughter of a unicorn mother and pegasus father: a unicorn like any other, her coat once a pure, youthful white, but decorated by a heavy blue feathering much like her father.
Because of a sin she dares not admit (but which is assumed being related to humans, due to her dislike towards them), Skylar is now tainted, a "Fallen", her coat turning a pitch black and her horn breaking under her sin. Her old forest never felt like home afterwards, nor her family felt like one; without other options, Skylar left, in hopes to put together the broken piece of her life to make herself a new one.

With the Lady Licorne no more in hiding, Skylar sensed the magic of another unicorn, and wandered into Rosamund's forest. The young fallen unicorn had never met a purebreed licorne, and was equally in awe at her superior magic and her kindness and acceptance. Rosamund finally felt like a friend, like having a family again, and Skylar decided to stay.
She vowed to always protect Rosamund; afterall, her horn was now managed and unable to perform healing magic like it once did, but was now much more well versed in offensive magic, unlike any other unicorn. Rosamund would never risk tainting herself, for Skylar would gladly do for her.

When learning of King Caelan and his relationship with the Lady Licorne, Skylar was shocked and furious; she was sure Caelan was no good, and would ultimately cause Rosamund harm, so she became a sort of bodyguard, making sure nothing "sinful" happened between the two.
Afterall, Skylar herself had loved a mortal one, and all she gained for it was a tainted coat and broken horn.

King Caelan Terell [ "if there was no magic protection, my horn would have already speared him." ]

The Guardian [ "unsure if worthy of my trust" ]