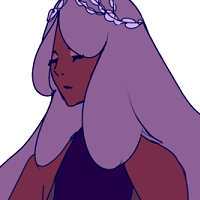 Stabbed in the back, literally and figuratively.

It wasn't long ago that Euphesme was the Head of the Ephemeral Kingdom: the Ephemeral Majesty. Her frightening mixture of kind smiles and cold, brutal, detached actions made her a Head to be feared. Her Kingdom was strong and the others relied upon its wares, so addicted to what it produced that no one could bring themselves to care. What she offered was as ethereal as it was dangerous, but just the perfect balance of the two to be insurmountable.

Euphesme enjoyed a life of power and glory. Her skills as a tactician kept her on top, and despite having the lowest strength of all of the Heads she was considered to be among the most powerful. Few questioned her rule and fewer were seen again once they did.

...There was one thing she overlooked, however. She didn't think to take her younger sister's envious brooding seriously, and when the day came that Perselié killed her, Euphesme could barely register that it happened. Her spirit was unable to move on, simultaneously baffled and angered - upset that she had been killed and offended that Perselié thought she had any idea what she was getting herself into - and instead she found herself bound to her Kingdom.

Fine. So be it. If Perselié truly thought she could take her place, Euphesme would humor her. She would watch as the Ephemeral Kingdom crumbled, equal parts indulgent in schadenfreude and crushed by the despair of watching everything she worked for fall apart.

Perselié is often seen muttering to herself, claiming Euphesme won't leave her be. Her subjects just ignore her, however, as there's clearly no one else there.