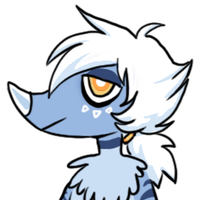 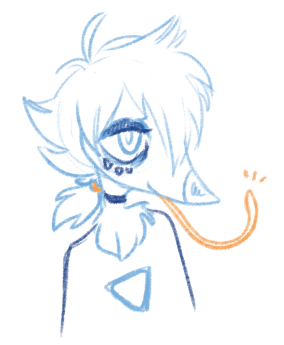 To and fro, I will not follow, where you go, I will not also.
I will look for you as the sun rises higher, when the dry bones dance with the timbrel and lyre.
There's a wind alive in the valley, it will fill your lungs if you'll have it.
Where I go, will you still follow? Will you leave your shaded hollow?
Will you greet the daylight looming, learn to love without consuming?

"All things are impermanent - even you and I. Even the memory of this meeting. Even so, be here now."

A mysterious, quiet Chimereon who seems to keep largely to themselves, Tut i Tam (often called Tuti, Wanderer, No-name, Nameless, or any other number of names assigned to them over the years by the strangers they meet) is small in stature and smaller in words. They seem secretive as well; when asked what happened to their arm, they always seem to give vague answers, or the answer changes every time. Given they ran away from home at a young age, any number of things could have happened--and whatever it was, they don't seem to want to talk about it.

Tut i Tam uses he/she/they and will answer to any of these, as well as almost any name, as long as they know they're being spoken to. They do prefer Tut i Tam over most, as it was given to them by a meaningful person in their life. That being said, they're a bit absentminded, so you might have to nudge them or get their attention first. Even more absentminded, they can't seem to remember names very well, and so they often refer to other Chimereons as "traveler," "friend," "pilgrim," or any such words. They don't seem to have a home themselves, instead living in tents, or generous homeowners' abodes, and traveling around to see the world.

In spite of their physical impairment, Tut i Tam loves sewing garments for other Chimereons, and is quite skilled at it. Their tongue can act as a second hand if absolutely necessary--sometimes they can be seen using it to wave or beckon others closer instead of their actual hand. The poncho they wear was another gift from their childhood. It used to be threadbare and all pale, like the outside of it, but Tut i Tam has a habit of collecting beautiful blue threads from various places and stitching them into the fabric. As a result, the inside resembles the night sky, and changes a minuscule amount every time they add to it. The gold ring that binds their hair into a ponytail was given to them by a rather rowdy friend of theirs. Since receiving this questionably obtained gift, they rarely seem to wear their hair down.

Tut i Tam has a kind of synesthesia-like trait, in which other Chimereons' voices show up as various shades and hues of color in their vision. As a result, they tend to know other Chams by the color of their voice rather than names. They love to create garments for them that match or pair well with the voice color--as a result, some ill-fitting patterns can be produced, at least to the opinion of the Chimereon receiving the gift. Needless to say, being in a noisy crowd is very overwhelming for Tut i Tam, for this reason.