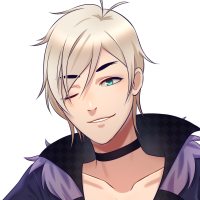 At a glance, Augustus seems like a guy who gives off a cold and mysterious vibe to him but in actuality he is a very sociable young man. He is very passionate about his singing, he believes his singing is not perfect, but still has room to improve. He would do vocal exercises every day and tries to work on a song cover at least twice a month.

He enjoys collecting shiny accessories, to complement the dark clothing he often wears; although, he is not fond of piercings. He also enjoys bird watching, he would often hang out in either at the veranda of his room or go to the park to do so.

He is well acquainted with Deo and D.SUE, he views himself as a big brother to the two of them. The former views him as a "fashion senpai" and tends to consult with him about that topic, whereas the latter is one of those who sees him as an annoying person although they do not particularly dislike or hate Augustus.

He has all of .frq files generated already He has extra vowels that could be used for vocal fry by putting the suffix [ ' ] (apostrophe)