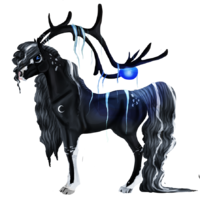 Appearance: A large black horse standing at 17'2 hands, and weighing in at 1700 lbs Stellar Infinitum is magnificent.
Their coat is black like the night sky, with spots reminiscent of stars. Their shoulder is marked by a moon, which changes with the true cycles of the moon. the crescent near Their eye is identical on both sides, and always remains in crescent form. They have stockings on their two left legs, a sock on the their right forleg, and a white pasturne on their right hindleg. both knees and hocks are marked with white brindling. they have an uneven white blaze with msall black spots around their nostris

Stellars Mane and tail are full and curly, with a few white streaks piercing the charcoal color.

And now onto their most defining feature. Stellar Infinitum is armed with two amazingly large antlers, which angle down to their back.  Each one has white brindling at the base. Between them floats a ball of light, brilliantly blue and shining.

Draped over Stells back andantlers, are odd filaments of light. made of soft and delicate fiberey materials, they emit a soft and unusual light. the thinner ones are nearly completely transparent.

Mysterious:
Often speaking in riddles,Infinitum is a very mysterious horse. rarely does he give clear answers or speak easily understood messages.
Soemtimes they go as far as to begin speaking in anotherlanguage, most often latin. they tend to answer questions with another answer.
This is all for when they even choose to speak. For they are also a horse of few words

Shy:
Despite their confidence in poetry and linguistics, Stell is quite shy. often keeping to themselves. the only time they truly speak to someone is when they have  grown very close to them. they are rarely the first to speak up.

di i not make this clear already?

Kind:
Infy" as those who know who well sometimes call them,is a very kind soul. always willing to lead others by their light, and to offer them riddled words of wisdom, or consolation. they never hesitate to help a friend in need. they are truly loyal and trust worthy.

History:
Stellar infinitum was born from Light and Darkness. Many years before, his mother and father met, Lux a stunning golden mar embodied the beauty of the light and the sun. Tenebris, a dark stallion with a coat black as pitch, embodied the darkness of burnt forests and death. Yet somehow They fell for each other. They found a place for themselves, a cavern where light and darkness could combine and made  ahome. A year later, under the light of a full monn Stellar Infinitum was born. they were raised by a mother who loved poetry, and a father who loved linguistics, and so they grew up with an education in both. their childhood was filled with strict teaching and light joy.
Two years later ave-Vale was born. A Stallion with a oure coat, he was anything but. Slowly it began to show how corrupted Stellars younger brother was. Every day a new dark spot appeared on his coat, until at a year old he was but a black horse with one white spot on his chest.
On that day Stellar found theirbrother killing a small rabbit outside the cavern. Immediately they retrived Lux, who after scolding Val, was promptly killed by him.
Infinitum had been paralyzed the whole time, and when it was over Vale spun towards them. And stellar realized how much of a coward they were, and fled.
to this day they have no idea if Tenebris or Vale are alive, but they live in constant guilt, and fear that Vale will return for him.