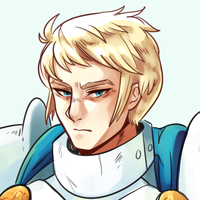 Elliot, Lord Caerleon, is the son of one of the King's diplomatic advisors, Duke Caerleon, and second cousin to the King himself. He is a tall, sturdily-built man with short blonde hair and an intense gaze. Given his noble upbringing, he has practiced etiquette and is very concerned with self-image, whether it has to do with demeanor, fashion, or framing himself with the right people. Despite knowing how to conduct himself like a nobleman, his passionate nature and strong sense of justice can drive him to cross the line in confrontations.

Against the advice of many others in the nobility, Elliot turned down the opportunity to become a Royal Knight and decided to join the Grand Guild Hall to become a hero instead. His younger sister, Lady Genevieve Martelot, was excelling in her studies. Elliot made it clear that he believed that she would be the better-suited to represent their family and their desires to strengthen the empire within the Royal Court, while Elliot pursued his goal of capturing the hearts of the commonfolk. While he has no particular love for commoners and sees himself very much above them, he understands that a kingdom is nothing without its people. Both his ego and his inclination towards glory led him to join the Guild, and he prepared by training in the mountains with the Dwarves who treated him as one of their own.

Elliot is a bit of a snob, but is not malicious. He is quick to comment when others are not meeting his standards, but instead of being completely condescending he will try to help them become the best versions of themselves. In battle, he places a hard emphasis on crushing his enemies and emerging as the absolute victor. He is unforgiving to those who threaten the well-being of the country and shows no mercy to criminals.

He chose the companionship of Haow-ken and Lucy based on their abilities and respects them both. He is confident that they can all rise in the Grand Guild Hall's ranks together. He sees himself as the leader of their group and plans to take everyone on the path to glory.

He is close with his maidservant, Ophelia, and trusts her with everything. He still lets her dote on him and treat him like a young lord, and is pleased that they are always on the same page. They are not too far apart in age and she has been taking care of him ever since they were both children.

This character was designed by @thedigidevil.