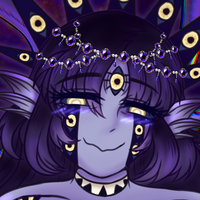 It was a terrible, indescribable thing vaster than any subway train—a shapeless congeries of protoplasmic bubbles, faintly self-luminous, and with myriads of temporary eyes forming and un-forming as pustules of greenish light all over the tunnel-filling front that bore down upon us, crushing the frantic penguins and slithering over the glistening floor that it and its kind had swept so evilly free of all litter.

—H. P. Lovecraft, At the Mountains of Madness

The definitive descriptions of shoggoths come from the above-quoted story. In it, Lovecraft describes them as massive amoeba-like creatures made out of iridescent black slime, with multiple eyes "floating" on the surface. They are "protoplasmic", lacking any default body shape and instead being able to form limbs and organs at will. A typical shoggoth measures fifteen feet across when a sphere, though the story mentions the existence of others of much greater size. Being amorphous, shoggoths can take on any shape needed, making them very versatile within aquatic environments.

Cthulhu Mythos media most commonly portray shoggoths as intelligent to some degree, but as dealing with problems using their great size and strength. The shoggoth that appears in At the Mountains of Madness simply rolls over and crushes numerous giant penguins that are in its way as it pursues human characters.

A Shoggoth of questionable morality, Ba'alsyadza is a female-presenting entity from the likes of H.P. Lovecraft.

She often has a "sweet" but unnerving smile and is rarely seen frowning, despite her emotions. Her personality is much more on the sadistic side, and manipulates other lower life forms for her own gain. Others who don't obey her wishes are often never seen again, reported missing. Those who are in her good graces have the access to her various abilities, and have a sworn ally, though they're few and far between.

Her residences of choice are at the bottom of the ocean, and desolate areas like Antarctica. She has the ability to shape shift to nearly any form, but her true form is an amalgamation of tentacles, slime, refuse, and eyes. Her usual presenting form has a lower half of tentacles, and plenty of eyes on various parts of her body. She also has another mouth with sharp teeth at her neck, used to intimidate others. With her ability to shift forms comes an immeasurable strength, and can be used for the smallest things of fixing the boat of an ally, to destroying the bases of her enemies.