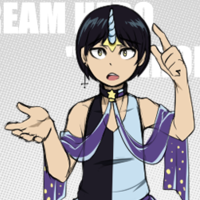 Remu is a short boy with a frail look and dependable personality. Although shy and even a bit cold, he is always polite and optimistic, actually, he is very simple minded. Because of his quirk’s drawnback and frenetic dreams, Remu is sleepy 24/7 and will eventually sleep on classes, he then studies extra hard at home to compensate.

Since kindergarten days, Remu was easily impressed and scared, being inflicted by constant nightmares about devilish monsters who would manifest in reality because of his quirk. Remu’s parents works as employees for support companies and rarely uses their own quirks, don’t having enough experience to help their child, they decided that taking a hero course would be the better way for Remu train his quirk and did all they could in order to prepare him for the best hero school they know: U.A. The boy isn’t sure about being a hero, but if his annoying nightmares may somehow help people, he believe it’s worth a try, nothing is totally bad... right?

Remu's quirk allowes him to materialize anything he had dream about during the last time he slept, if he dosn't remember what he dreamed about, some random element will be summoned. The invoked element keeps all features and powers it had on the dream but it's personality is lost, working basically as a puppet controled by Remu's emotions and wishes. It's connected with his horn by a spectral chain that may reaches up to 3 meters, if said chain is broken the dream will dematerialize and cannont be summoned again. He can manifest only one element per time and for each 10min it's keept active, it's like he have lost 1 hour worth of sleep.

His horn is made of very rigid bone and in worst case scenarios may be used to stab opponents in a close combat, however, if it suffers middle to severe damage, Remu will lost control over his quirk until the horn is fully recovered. Because of the importance of said horn, his organism prioritizes it's sturdiness and tend to send mostly of ingested calcium for it, which requires Remu to have a diet rich of the mineral.

Remu's costume is a very simple outfit made of regular cotton-fabric, being very confortable to wear. It was designed by his mother.

Masamori(昌盛) & Aiko(愛子) Yumeno: Remu’s parents are very caring and somehow overprotective about their only child. Masamori, Remu’s father, have the ability to create small, tasteful treats that once injested provocates severe stomach-ache, his quirk is named Intoxication. Aiko, Remu’s mother, is who he inerated Lucid Dreams from, but differently of her son she have pretty simple dreams.

Nadeshiko Komura (虎斑撫虎): Remu’s girlfriend, she saved him during the battle simulation exercise, earning his gratitude that easily developed into friendship and later in love. Remu calls her Nacchan and she’ll carry him on her arms when he accidentally falls sleeping on innaporpriated places (or when she feels like). During breaks, they like taking naps together, since Komura also have low stamina.

Fumikage Tokoyami (常闇踏陰): the first time he saw Dark Shadow, he got so scared he had a nightmare about it and ended up creating a duplicata with his quirk during hero classes, what caught Tokoyami’s attention. Since then, they have been eventually training together and Remu will eventually bring him apples.

Yuga Aoyama (青山優雅): differently from most of their classmates, Remu dosn’t ignore when Aoyama is talking, so the boy found a like in hanging with him. Truth be said, Remu eventually enjoys his company and his aesthetics.

Midnight (ミッドナイト): because of her quirk, Somnambulist, Remu always thought that she would be a great mentor and help him to “reset” his dreams everytime he don’t get a useful one. When he told it openly, Mineta and Kaminari teased him with nasty comments, so he never talked about it in class again.