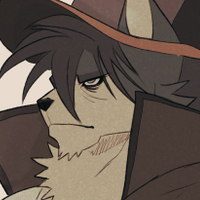 Ruthless and grumpy, Castline is a captain of his own ship: the Inter Orbis. Tasked by the devil himself, Castline acts as a reaper harvesting souls wherever he sails. In return, he is rewarded with bountiful gold trinkets; something he had come to take a liking to during his younger years. However, the price he paid for his immense wealth was not facile. He was taxed with undying service and ultimately, his very soul. Though many decades have passed since the event it is still a fresh as ever rumor among his crew that their captain is completely soulless. Many think this is the reason why his emotions are so stagnant.

Castline speaks with a snarly, rugged voice and isn't afraid to snap at any crewman that so much as puts a toe out of line. He has been known to threaten to feed mutineers to the "fanged beastie" - a creature Castline has seen but never described to anyone else beyond a name.

The emperor of the underworld, Asathanos is charged with rehabilitating the souls gone astray in life. Castline, wishing for gold, was tasked by Asathanos with the job of bringing souls to an uncharted island, where Asathanos' steed would consume them.

Asathanos' main underling, Irvin too wished for better means in exchange for his soul. The deer craved to be stronger, more powerful, and was granted the wish by becoming Asathanos' monstrous steed.

After being dropped down to earth by Adontis, Octis was picked up from the ocean by Castline and enslaved on his ship. During his time there, Castline slaughtered the crewmates Octis came to befriend, and eventually brought him to be fed to Asathanos' steed.