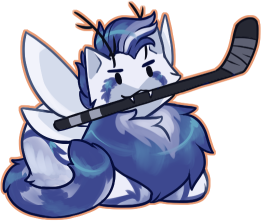 Growing up in a province of Quebec, Everett has had hockey running through his veins since the moment he could walk. He held a natural affinity for the sport from a young age, which led his parents to focus all their efforts on his success. While he's grateful for all they did to help him achieve his dreams, he doesn't have much of a relationship with them outside of the sport. After years spent grinding in the minor league, Everett now plays for the Cobalt Blues, and is even an alternate captain.

On ice he's a menace; a huge presence both literally and metaphorically, unafraid to get rough. He's known for racking up penalties and checking people in the boards, hard. Off ice he still has a large presence, but he's softer around the edges. He's loud, unafraid to laugh at himself, and very opinionated about almost everything. He's very honest and straightforward, both with himself and others. Sometimes this comes across as abrasive, but it also means that what you see is what you get with him, and you know he always means what he says. Despite his on ice aggression he doesn't actually have a lot of bite, unless you mess with one of his hockey rituals.