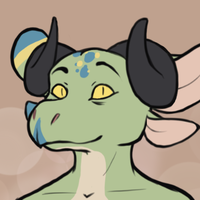 A hyper-intelligent kobold from the distant country of Abron, Piksel found himself alone in a sea of faces within the city-state of Nicodemia. He took a job as an artificer, putting his brilliant mind to work, and until recently designed deluxe security systems for those who could afford it.

After the accidental purchase of contraband at an auction, he found him swept up in a world of bounty-hunting, pirates, relics from bygone eras—and that wasn't even touching the secrets he was fleeing from to start with.

Some months and a bevy of adventures later, Piksel has starred in a play, discovered he's cursed, confessed his most shameful secret, met the love of his life, broken a pirate ship in two, reunited with his sister, died, and been resurrected into a lich with the Eye of Vecna. It's all been quite a lot for such a small creature.

Now, three years later, Piksel's life has calmed. He teaches children in the city's first public education initiative, and is happy engaged to his boyfriend. It's really too bad that the moon has just disappeared, and he's apparently expected to do something about it; worse still, he's just found out that his soul—thought to be embedded in the Eye now lodged in his head—is actually in his adopted daughter.

One of a sub-species of kobolds known as blue-taileds, Piksel is smarter and more capable than his "mainland" cousins. He stands at 3'6" and dresses in simple, functional clothing suited to his line of work. For a time the most striking thing he owned was his mechplate gauntlet, a metal glove he wore on his right hand that had a number of unique capabilities such as generating heat and electricity and firing a magic force blast. More recently he has been forced to bear the Eye of Vecna, a singularly evil artifact that has altered his magic and abilities considerably—to say nothing of the disfigurements he acquired along with it.

Being small in a world of giants and constantly having others assume he is unintelligent due to his species has made him prickly and unavailable to strangers, but not very far underneath he is a compassionate bleeding heart.