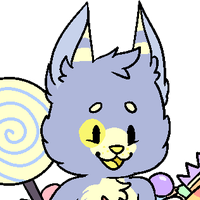 My boi Kipses (Pronounced like Ramses) or Kip for short.

He is ace (A pure little innocent bean)

He likes cute stuff and being generally cute, art and drawing, and exploring especially with friends.

He dislikes rude/disrespectful people, alcohol and cigarettes. He generally doesn't get angry, instead its more annoyed, unless something/someone he likes/feels territorial over is being threatened or bullied.