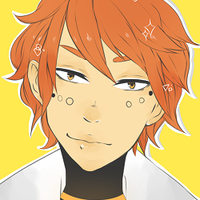 Shortly before NaNoWriMo 2012, probably around September since that's when I had the dream that gave me the idea for him.

The feeling of punching things in the face, new people, sneaking up on people and scaring them, romantic comedies with an emotional climax, popcorn, throwing trash into the trash can from a distance, throwing things at walls really hard to see if they'll break or stick, sticky notes, cute people, being spoken about in a positive light, bananas, kids, utterly destroying terrible people, organizing things, being in physical contact with people, the smell of permanent markers, cotton candy, hash browns.

LeFleuris, leaders who don't do anything, when people harass people who can't plausibly fight back, uptight people, small spaces, wearing a lot, video games, big words, manipulative people, math, when people cry, recycling, forgetting where he put things, when the smell of metal sticks on your hands, being ignored, kimchi.

He eats sandwiches with a fork. What the fuck

Lausac is hot-blooded, impulsive, irritable, and seldom thinks before speaking. He's brash and loud-spoken, never failing to let someone know what he really thinks in the most forceful way possible. His first thought is usually to resort to violence when presented with a problem, and if that doesn't work then the answer is to swear a lot. He also tends to be teasing and mischeivous with others, especially strangers, and likes pulling pranks on people when he can.

Due to his fiery and often annoying personality, he doesn't have very many friends and fewer close ones. He has a hard time understanding the emotions of others and operates under the assumption that everyone has had the same experiences as he's had, though this isn't so much intentional ignorance as it is being a member of a species with very different values than the rest of the universe.

In recent years he's become more self-conscious and introspective, and though he still struggles to really understand others he's gotten better at apologizing for his actions if it's made clear he's really hurt someone. He worries a lot about not being good enough and is desperate to prove his worth to others. Fears being seen as useless and inferior. Is pretty clingy to his friends, for better or worse; he's an incredibly loyal person but that comes with plenty of less pleasant quirks. He can be overprotective and sometimes even a little jealous.

If he's not already in the middle of bothering them or raising hell with them, Lausac is extra protective of and tends to have trouble talking to "cute" people, like Orange and Esme. Not that he thinks they're cute or anything I mean-

"So, whaddaya say? Ready to raise some hell?"

On Ardesia, society is centered entirely around the markings under one's eyes (which show up at or around the age of 10). The markings signify at which age a person stops aging, and the age an Ardesian lives is typically ten times their physical age:

What tier you are determines your importance to society. Ardesia is a war-oriented planet due to frequent invasions by those wishing to exploit its tremendous number of natural resources, and as such needs a constant body of warriors. Tier 0 Ardesians are considered completely worthless because of this and their infertility and are regularly harassed and abused. Tier 1 Ardesians are treated as faceless pawns to be sent to slaughter, Tier 2 Ardesians are hailed as brave warriors and Tier 3 Ardesians are seen as wise leaders, hardened by experiences that they may or may not have ever even had.

Born to two Tier 3s, Lausac had high expectations placed upon him before he took his first breath. His parents were disappointed to find that his magical output was low and not particularly suited for the sort of chaotic warfare that often engulfed them, fearing that he was a Tier 0. He, like many other Ardesians found to have any power that was anything other than hyper-offensive, was placed in a holding center where children were left until their markings appeared. If their markings were acceptable, their parents accepted them back with gusto even if their combative abilities were lackluster. After all, it wasn't what an Ardesian accomplished that defined them - it was the appearance that they probably had done something worth respecting. Naturally, holding center children weren't looked upon very highly and were usually treated as though they were Tier 0s.

Growing with a number of known and expected Tier 0s, Lausac became disgusted with the way his planet's society worked and often discussed changing everything with his peers. They would turn everything upside-down and destroy the ridiculously unfair norm, somehow.

Once revealed to be a Tier 1, Lausac was quietly accepted into the military and never returned to the holding center.

Like many Tier 1s, Lausac was efficiently reprogrammed to forget about the unjust society he lived in and focus solely on the enemy. He was taught to think of himself as better than others while completely submitting to the will of those in higher tiers. And Tier 0s? Worthless. Fun to beat up and order around in off-time, not worth saving in battle if it came to it. Lausac was fine with that, he thought. In the back of his head he wasn't, but he had to think about himself. When he thought about the discrimination he had faced while in the holding center, he thought about avoiding it, not destroying it. He didn't want the little respect he had from people now to slip away.

The enemy of the hour once Lausac was facing his 20s was the All-Conquering Overlord, Hadris Torant. He was certainly the biggest threat the planet had faced in a long time, and the cultural divide had never been clearer. Tier 0s supported his arrival and preached peace and Tier 1s were essentially told they were going to die for the sake of Tier 2s and Tier 3s. That feeling of wrongness in the back of Lausac's mind had a firm grip on in him by now, one that was starting to drive him to the edge. The years of being treated as inferior by higher tiers despite doing far more than they were doing began to build up; finally he wondered if it was worth it to please the higher tiers, if upholding the norm was more of a nightmare than tearing it apart. He thought about his old friends and wondered where they were now, if they were even alive. He wondered if his comrades felt the same way he did. He wondered if anyone in the higher tiers gave half a damn.

He wondered this as he lie bleeding to death in the aftermath of a cave collapse that was a blatant move on the part of his superiors to use Tier 1s to lead Hadris' forces to their doom, surrounded by the dead and only as alive as he was due to his ability to phase through objects. Of course, now he was quite literally caught between a rock and a hard place without the energy left to phase out of both his armor and his surroundings. Knowing no one would waste resources helping him even if they found him - hell, even if he managed to escape with his life - Lausac thought about how he would prefer to die.

Conveniently, the overlord himself happened to be in the area at the time. As in, the collapse was supposed to kill him and it certainly didn't. Feeling the timing wasn't quite right to destroy some more yet, Hadris had a nice chat with Lausac and offered to save his life. No catch, but did he really want to keep serving the people he was serving? Working for Hadris would probably be a better experience. Maybe even an awesome one.

Lausac was hesitant to serve anyone at all at this point, but anyone who wanted to raise hell on Ardesia was officially a friend of his.

It didn't take long for Hadris to conquer Ardesia once he had arrived, and work on social reform began immediately. Impressed with his work and attitude, Hadris asked Lausac if he wanted to come back to his personal dimension to help him elsewhere. There were a number of factors that led to his response: the sense that his job on Ardesia was done, an overwhelming sense of shame and regret whenever he saw a Tier 0, the inability to look at higher tiers with anything but contempt and bloodlust, an eagerness to explore, the promise of plenty more action that would actually lead to better lives for people, and a quickly growing trust in Hadris.

He accepted, and within a few years was given the title of Saszyl Representative. A few years after that an intern named Orange joined Hadris' forces, and the two became increasingly close as they found themselves embroiled in all sorts of misadventures and conspiracies where the fate of Hadris' empire. B-But like, not in a gay way! No homo bro.....................

Lausac has come along with Hadris to visit all sorts of Realities, though he hasn't done too much yet. Of note is that he became acquainted with a girl named Esme alongside fellow Representative, Flann. He doesn't think she's cute or anything it's just!!! Fuck off okay!!!

He hung around some abandoned ruins for a while, where he met Iorano and Velinar. Lausac being Lausac, he quickly took to teasing them and overall doing nothing to quell their suspicions of him.

Lausac is quick and obnoxiously dodgy. He's able to defy gravity and stand on any surface at any angle and can bring anyone else along as long as he's touching them. He can jump pretty high and is bizarrely floaty, said floatiness able to be controlled with his ridiculous-looking boots. He can also turn intangible, phasing through objects with ease and making himself totally invincible. Is able to see in the dark just fine and has unnatrually good locational memory.

Offensively, he's capable of firing energy bullets from his fingertips that can be charged for higher firepower. And he's alright at punching people in the face, but he really shines with improvised weaponry.

For all his love of fighting people, his offensive stats are poor. He's very much quantity over quality, capable of dishing out utter bullet hell that doesn't do the damage you'd think it would. He still has a decent damage output, of course, but getting above decent requires expending a lot of energy. Expectedly, his defensive stats are also rather poor, though his magical defense stat is at least acceptable.

His intangibility is limited, draining his power quickly. He prefers to use it in short bursts and usually just to pass through obstacles, especially since he can't shoot things and be intangible at the same time.

Support Your Local Mafia || September 16th, 2013
💥  Hadris hosts a game of Mafia with the Representatives. Lausac bets his ass and loses. His ass is now legally, canonically owned by LeFleuris. Please do not bet your ass on party games!