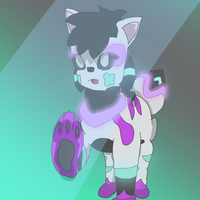 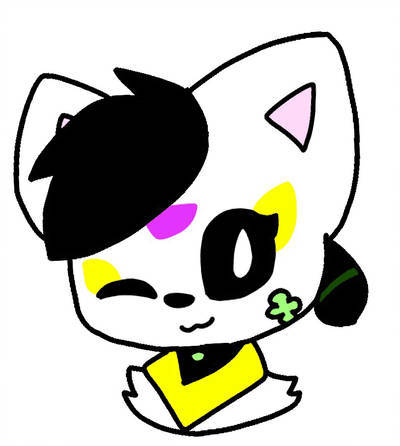 Type Ghost/Fairy
Gender female
Nature quiet
Ability super luck
Age 14
Height 3'7"
Build sleek
A Chimera created from two glitch Pokémon, Dustramana and Vularena. It keeps the luck-boosting abilities from Vularena as well as the ghostly powers of Dustramana - it is NOT something to be messed with.

Azyuki is something special. But we'll get there. For now, just know that she's got some...interesting quirks.

Azyuki is a very trusting Pokémon. This has gotten her into a lot of trouble before. She's quite empathetic too - in general she's a good friend to have.

Yuki and Runa. A Vularena and a Dustramana. They were good friends, they did a lot together. Including the final act. The pair liked to adventure, but one time they encountered something big. A Hydreigon. It attacked the pair. Runa was alright, though a bit worse for wear. But Yuki was mortally wounded. Runa panicked. She figured that if she were to possess Yuki's body, she could lead it to someplace where she could be helped. But due to some mishap while starting this action, she ended up fusing with the Vularena - creating Azyuki. Azyuki has no recollection of either Pokémon's memories, except in mysterious dreams where she seems to be in Runa's body. She often has these dreams, but most Pokémon dismiss it as "just a dream," because Azyuki just doesn't know why they're happening, just that they seem so real. The only one who knows the truth is Sachi, her adoptive mother. But she doesn't want to tell Azyuki - she doesn't want to hurt her like that.

Borrowing the power of the moon, the user attacks the target. This may also lower the target's Sp. Atk stat.

The user hurls a shadowy blob at the target. It may also lower the target's Sp. Def stat.

The user plays rough with the target and attacks it. This may also lower the target's Attack stat.

The user combines glitch energy and a heavy tackle to wear down the opponent.