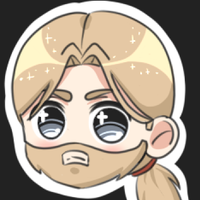 Background: He was born in a small village near Crimson Wood in a very religious family. His mother was examples of virtues for him and his siblings, even when she was very strict. One of the children forgot to pray? Punish! One of the children is not listening? Punish! Their father was hardly at home at all, because he was earning for living for family. But he couldn't do anything anyway, he was too scared of his wife. When Christian grew up a little, the crusaders passing through his village decided to take him to the convent, because he was the strongest and most promising than his siblings. After this event, he didn't see the family anymore. In the convent, he was growing up in faith and was teaching to fight with the sword to fight in the later life in the name of god. When he grew up, he became a real, attentive man and he left the convent to go on a lonely expedition to spread the word of God. Amen.

Personality: Although for Christian the most important is god, honor and fatherland, he is not so holy at all. He feels resentment to the blacks and the sick, because he considers them to be weak and punished by god. He also sees women as being worse than men, but he assumes that women must be protected because they are very sensitive and delicate. He has a strong sense of justice (this is a broad topic about "justice" in his opinion, as he sees it). He is explosive. Sometimes he seems to be really cold. He yells a lot.

Likes: To eat a lot (big meals, especially with a lot of meat), alcohol, sleeping, a mess.