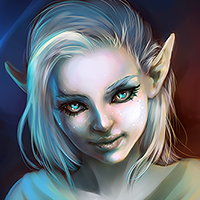 She's currently a cipher, and captain of the ship The Enterprise (yup I did that). From The White That Wends. Explorer background.

But who cares who she saves or kills? When what you want to know is who's in her usual party: Edér, Pallegina, Aloth, and Tekehu. Or who she sleeps with. Which is first with Aloth, then they go their separate ways and then Edér finally because Obsidian is Wrong. She loves both of them but is currently in love with Edér.

She's usually very diplomatic and rational, but can be funny and passionate as well.

Likes animals and nature a lot (was a druid in PoE1)

You can draw her in light armor, or casual D&D-ish clothing. Though I don't think I would mind modern clothes a lot.
Bonus for drawing her in pirate clothes!