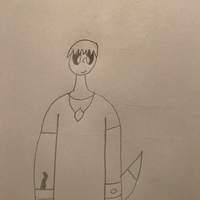 This form of Greg was caused by Nemeseta and Cody's idea of a prank. It backfired for Nemi and turned Greg into well...basically Alice but it's Greg.

He can fly (Green fairy wings), can summon a wood hammer, and teleport. He also has his own mini-realm, a forested area with only two known at the moment in it. Greg goes there from time to time, the other is a Scorbunny named Sean.