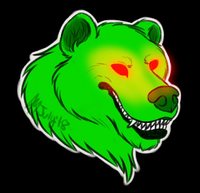 Personality: Eden is quite the terrifying nightmare. He tries not to interact with mortals as he finds them to be a nuisance. The only time he love interacting with mortals is when he is scaring the living hell out of them and when he is causing them nightmares. He does this so he can feed off of their fears and nightmares. He can be quite gluttonous when it comes to fears and nightmares. Which isn't a good thing for his victims as it distorts his form and makes him look even more terrifying then he already does. He really doesn't care for morals and does whatever he wants. Eden is short-tempered and absolutely hates it when things do not goes his way. He can become quite aggressive and violent when he is angry. He usually scares children as they are a lot easier to scare than adults. He uses his shape-shifting powers to transform into his victims' worst fear for the maximum amount of fear he can get in one sitting.