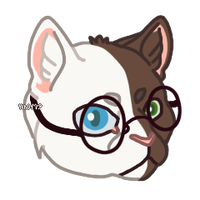 Personality: Cyrus is quite the intelligent and clever individual. He is is extremely intelligent and is a quick learner. He is usually bored because of he usually solves things within minutes. Though, he tries not to let his boredom get to him. Cyrus is quite the good lair. While he doesn't always lie, he will lie to avoid interactions with people and can make a very good lie on the spot as it was actually the truth. He is also sarcastic and tends use it whenever he asked a question that he finds to be stupid. Cyrus prefers to be by himself or with his two friends. He does not like to socialize with others, he isn't shy, he just really doesn't like to interact with other people. He gets annoyed/ irritated rather quickly. He is impatient when it comes to interacting with others, but is however very patient when it comes to waiting for non-living objects to finish their tasks and writing. Cyrus doesn't really have a sense of humor and he is usually very serious. He usually kills the mood whenever he is present. Cyrus is very creative. He loves to write and also read. He can be described as a 'bookworm.' He loves to come up with stories and escape from reality with them. Cyrus also has an insatiable sweet tooth. He loves anything that is sweet and tends to spend a ton of money on junk food. While he does try to keep a balance diet, he cannot help, but to have a more than few bake goods and candy a day. Half-moon cookies are his favorite.

- He is a distant relative of Charley (they never met).