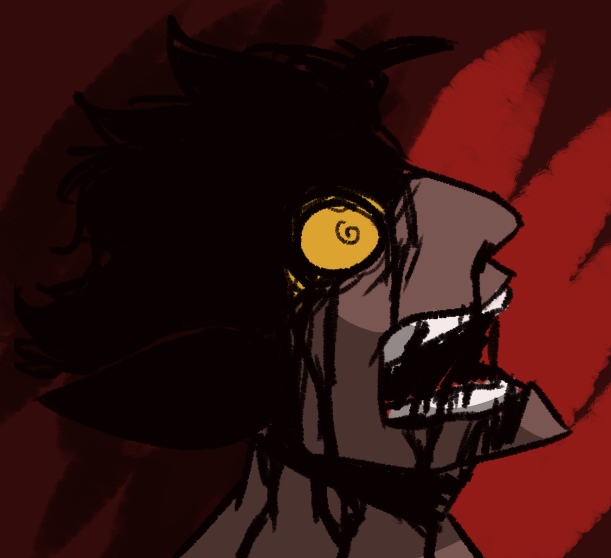 An ancient and immortal being cursed by the God Shezi after its pact with Mao. Hawser has no will of its own and has long since lost all memories of its life before the curse. It cannot die or be killed for any reason though it can become, sick, hungry or thirsty. It was once human, but its ears and body were disfigured after its pact with Mao and further twisted through the years after he was cursed.

Hawser's mind has long since been broken due to prolong isolation and the constant threat that if it does something its God will disapprove of, the rope around its neck will tighten causing it to choke or suffocate without dying. Most of its former humanity has been destroyed through the years though it still possess the ability to speak in one word sentences. Despite this, it is still an rather intelligent creature, the training and education it obtained in its early life still lying dormant within. It is an excessively timid and obedient creature that often quakes in fear if it feels it has done something wrong.

Before it was afflicted with the curse, it was a member of the royal family. It received a high level of education and training in a variety of subjects. Having lots of older siblings, it had plenty of ambition, but no chance to ascend to power. It decided to take measures against this and made a deal with Mao, the Cat. Mao was technically of the same "species" as the rest of the Old Gods, but had none of the authority having been cheated out of her position by Laoshu, the Mouse, long ago. Mao was said to be the creator of demons and a possessor of great power.

The pact it made with Mao, freely granted the power it desired in order to take the rulership of the Empire by force as well as immortality so that its rule would be eternal. It killed many of its siblings and extended family members. When the Emperor caught onto this, he was able to retaliate and called upon his God to inflict a curse upon his detestable offspring.

The royal family at the time were all worshipers of the Shezi, the Snake, a vengeful Goddess who gladly performed the deed, disrobing it in order to rob it of pride and tying an unbreakable rope around its neck which would tightened and choke it whenever it acted against her wishes. It was allowed to keep its power and immortality as a tease. It could not try to fight back against anyone without the robe choking it and it could not end its suffering through death.

After several hundred years, his spirit is broken. Even after the Old Gods vanish, he is too paranoid to realize that the rope around his neck no longer tightens and continues to be fearfully obedient. There are few people who have actually seen him, but his story is told as a legend and warning against displeasing the Gods. It was only given the name Hawser after meeting Eris Blackwood.

Seeing the creature's power Eris manages to induce it to come with her on her quest to restore the missing Gods. Over the course of the journey and several years, Hawser slowly becomes more and more human in behavior and once they manage to make contact with Shezi, Hawser asks her to end its curse and its life as it has already lived far longer than it'd like.

I guess this is a totally new character, but it was partly inspired by one of the original characters, the Idolmaster who was also cursed by Shezi, but had a totally different backstory involving his brother being born evil, but his dad thinking it was him and causing him to make certain bad moral decisions that I can't really remember. The Idolmaster could turn people to stone with a glance and so wore a blindfold. Very different I know.

[ master ] Eris was the one to give it a name after it had long forgetting its own. Eris saw its power and after several days of coaxing, managed to induce it to come with her on her journey to restore the Old Gods. Although at first it continues to behave like an animal, treating Eris as its owner, Eris is determined to get him to act human again.

[ goddess ] Cursed him an eternity again. At first he hated her, but has his spirit broke over the years, he bent into desperate obedience.

[ pact maker ] Made a pact with her an eternity ago. In the early days after his curse, she would taunt him and encourage is hateful feelings. She has stopped since, having grown bored of what she considered her toy.